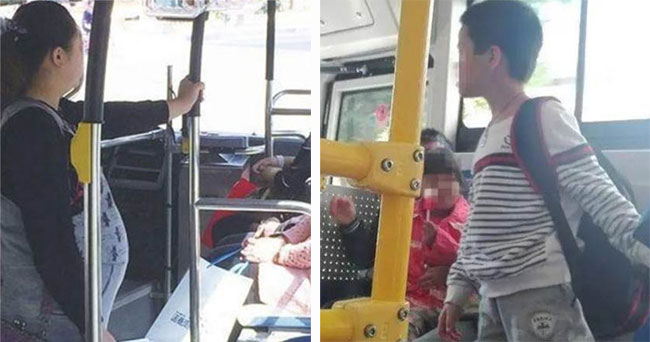 Pregnant women belong to a special group in society. They are treated specially. Even on public transportation, people will spontaneously give up their seats when they meet pregnant women, and there are also special seats for them.

Usually, women who have experienced pregnancy and have given birth will definitely give up their seats when they see a pregnant woman on public transportation.

Some time ago, there was a pregnant woman who boarded a bus. And what transpired has become the talk of many people.

The pregnant woman’s name is Xiao Li. She takes the bus to work every day. But because that morning she left a bit late, the bus she used to ride was full and there were no seats left. She had to stand by the door holding on to the handle and facing out because she didn’t want others to know that she was pregnant and give her a seat.

A middle-aged woman was sitting next to her. The woman glanced at Xiao Li because she felt Xiao Li’s stomach hit her, she then pretended not to see and looked away.

This scene happened to be seen by an elementary school student sitting next to her, and the boy then asked the woman to give up her seat to Xiao Li. The middle-aged woman, instead of giving up her seat, suddenly spoke to Xiao Li: “If you don’t have money to buy a car, don’t have children.”

“Why did you say that? According to you, if you don’t have money to buy a car, you should not have children. But, Auntie, you are taking the bus now, so why do you have children but you can’t buy a car?”

The middle-aged woman who heard this question immediately fell silent. Everyone on the bus heard and praised the boy.

One netizen also said: “When I was pregnant, I had taken the MRT twice. Because I was afraid that other people would see that I was pregnant, I always wear loose clothes and it doesn’t matter if I stand up. It’s not that there are no cars, but for some reason, I find it convenient to take the bus and the MRT.”

Many netizens expressed their anger at the woman’s behavior and argued that if she didn’t want to give up her seat it was also fine, but there was no need to embarrass the pregnant woman.

Some netizens said: “Pregnant women who ride the bus don’t mean they are poor and don’t have money to buy a car. Pregnant women are not safe to drive and special seats for the elderly, mothers with very young children, sick, pregnant women, and the disabled are prepared for them. After all, money doesn’t determine whether or not a woman deserves to be a mother!”

Although the middle-aged woman angered many people, the boy’s reaction was very moving.