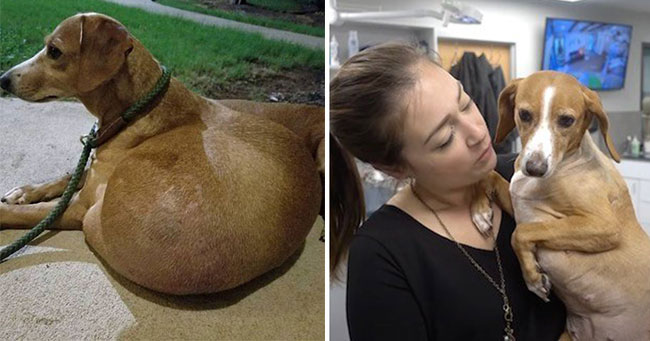 A dog who had a very large tumor on his body now has a new life thanks to a dedicated rescuer and the Vet Ranch. The lucky dog now lives the best life with her new owner.

Poor Hattie has been handed over to a shelter in Texas for euthanasia by her heartless owner, who has also allowed her tumor to grow for 2 years doing nothing.

She came to the attention of the Dallas Dog Rescue Rehabilitation Reform which described Hattie as “probably the dog with the worst owner they’ve ever received”.

Hattie was immediately taken to Dr. Karri from Vet Ranch, who said he had never seen a tumor as large as Hattie’s before. Dallas Dog RRR said the tumor was even bigger than a bowling ball!

Dr. Karri said that Hattie had difficulty walking and became unbalanced because of the tumor weighing on her.

He also showed how other dogs will lie on top of Hattie, and she looks like a beanbag chair! Can you imagine?

Hattie’s recovery hasn’t always been easy, she’s also had a few setbacks, but in the end, she got through it all and went to a shelter.

Now, she is on a quest to find her beautiful forever home, thanks to her savior!

Despite everything, Hattie almost died due to the negligence of the previous owner. But luckily, her rescue had a happy ending!