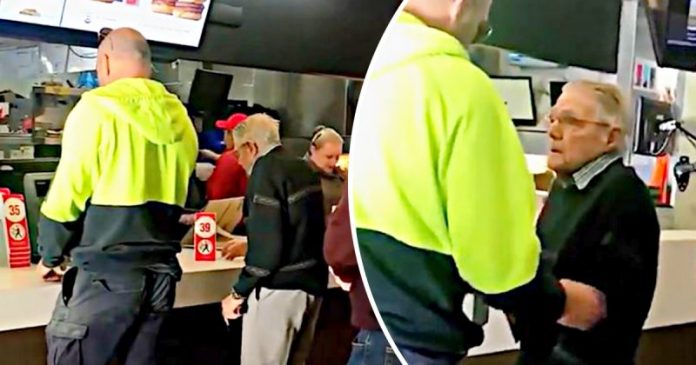 It is not difficult at all to do good every day. Just a little help can sometimes make other people smile because of you. A simple gesture can go a long way.

That’s what one man, David Love, did when he was seen helping an old man while in a McDonald’s restaurant.

The selfless builder was about to order food at the counter when there was an elderly man who was trying to get his money to pay for his food. Seeing the old man’s condition made David generous to pay the price for his food, too.

Touched by what David had done, the elderly man continued to thank him and started to go to the next counter to claim his food order. However, David’s kindness did not stop there when he then took out his money, got a $20 bill, and gave it to the elderly man and once again he thanked him.

David’s kind behavior was quietly recorded without his knowledge. When a woman who filmed the video asked about what he was doing, David told her that the old man only had about $20. So he decided to pay for the food and gave $20 to the old man.

What touched David more was staying at the restaurant to make sure the old man was treated well. He even politely checked on the elderly man before leaving the restaurant.

What David did was a very good thing and we can also take his actions as an example. Maybe after this, we will be more generous and lend a helping hand to those in need.

The most glorious action ever recorded is in this video: