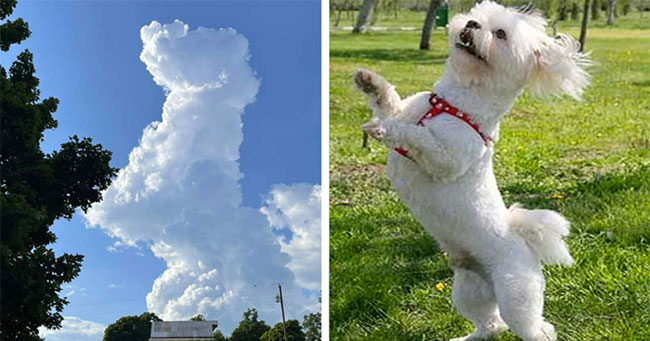 People around the world have different beliefs, that’s why, more often than not, when we encounter something unusual, we take them as “signs” or messages for us. But sometimes, nature has other ways of playing with our sights. They may be mundane or celestial.

One day, Melissa Lanham was at her home in Kentucky, USA, when something on the horizon caught her eye. There, above the clear blue sky, stood a fluffy white figure that bore an uncanny resemblance to a puppy.

“I was sitting on my porch and happened to look at the barn and said, ‘Gosh, that looks like a dog!’” Lanham told The Dodo.

The cloud dog seemed to be standing tall on its stout cloud legs — as if it was jumping to grab some heavenly food.

But actually, the treat was for Lanham. She immediately shared what she saw.

“I grabbed my phone and started snapping,” Lanham said. “I was like, ‘That’s really cool. I have to share this on social media.’ It’s not something you see every day.”

Luckily, Lanham immediately took a photo of the cloud dog because not long after, the cloud immediately lost its shape and no longer looked like a puppy.

“It didn’t take long for the clouds to take on a different formation,” Lanham said. “So I was in the right place and at the right time.”