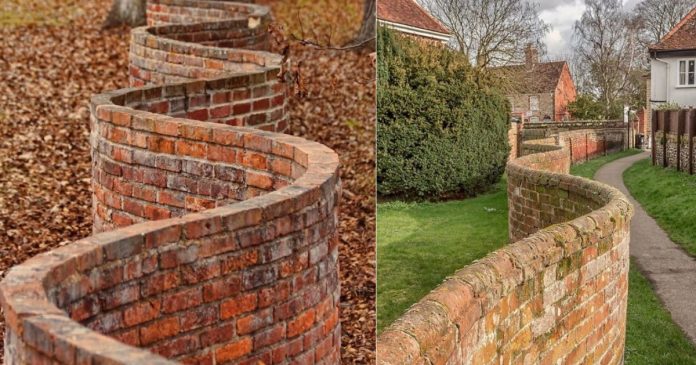 Whether you are in a school, a stadium, or a villa’s yard, you can see a smooth wall surrounding the building. However, in the UK, there are curved, wave-like brick walls in various areas. In addition to their special appearance, there are hidden advantages!

This kind of curved brick wall is called “Wavy wall,” and it is also known as the wrinkled crankle garden wall. When people first saw its cute shape twisted and curved, many thought they were just for display, but this kind of wall is actually more practical than straight walls!

When people first saw the wave walls, they thought that it would take a lot of bricks to build them. But in fact, the wave wall uses fewer bricks than straight ones, because its thickness is only one brick. Generally, a straight wall can easily collapse if only one brick is used, but the arched structure can effectively break down the external pressure, so it is not easy to dump!

The wave wall does not only save about 25% of the material cost but also protects the fruit trees and plants in the garden. It is also very effective in garden viewing. This is why the wave wall is often built from east to west because only the plants on the side of the wall can be exposed by the warm sunlight!

The wave wall first appeared in England in the 17th century. Today, many different forms of wave wall can be seen in the Finnish area of Cambridgeshire in the east of England. This place is also regarded as the origin of the wave wall!

Thomas Jefferson, the third president of the United States, specially introduced the wave wall to the University of Virginia, making the curved wave pattern one of the school’s symbols!

UK citizens who have seen these curved walls firsthand have expressed their interest in having them built in their own backyard. Find them interesting? Coz I do!

Dog with Large Tumor Surrendered by Owner for Lethal Injection; She...