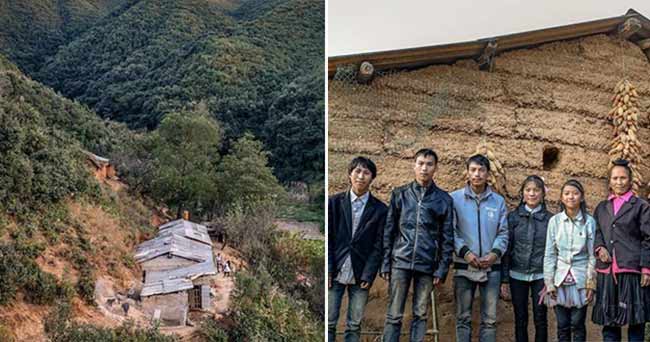 In a mountain forest in Yunan, China, a group of local volunteers went to the countryside to do charity work. As they passed by a small lake, they met two sisters, Zhang Xiaomei and Zhang Meihua. They discovered that a family of 6 has been living here with their mother, away from civilization.

Several years ago, her husband suddenly passed, and the burdens of life fell upon the mother, causing her to suffer from a breakdown.

Now that they live away from civilization, this family of 6 frequently goes to the mountains to look for medicinal ingredients, pick mushrooms, and herd goats. This is their family’s main source of income. They also grow vegetables for their food needs.

Years have passed, and due to her mental breakdown, her two daughters have taken over the daily cooking chores.

While her three sons go to the mountains daily to herd sheep, look for medicinal ingredients, and pick mushrooms, then sell them to the nearest village. The proceeds from the sale will be used to buy other necessities.

The third son, Zhang Fujin, said that he used to travel across the mountains for more than 3 hours.

In the last two years, road repairs have been done in the mountains. They had some chances of going out, and the brothers had started to buy some modern stuff from the city.

Pan Zhixian and her 5 children have been living in the forest for a long time and they live a primitive life.

Due to their special geographical environment, they have not had household registration for several generations. Their existence is also unknown by the public, hence, they are rarely monitored.

Later, the volunteers returned to town to collect donations for them. After buying clothes and daily necessities they returned with local government representatives, and they then placed the family in a residential area in Anning City.

Their mother was sent to the hospital for treatment. The youngest daughter attends primary school at the local school. The three older brothers continued their work, running a traditional farm in the mountains.

“Soon, we will be able to get out of the mountains and work outside to integrate into modern society,” they said.