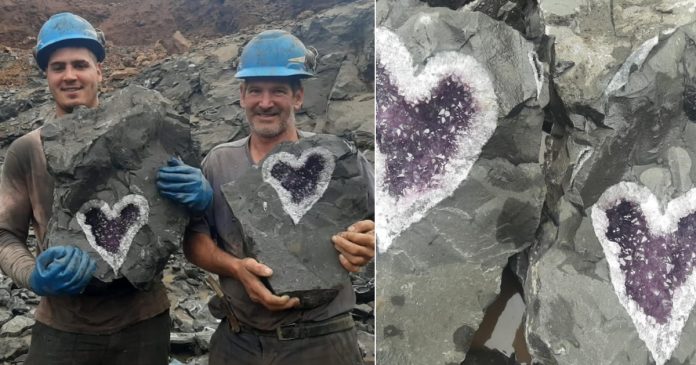 In the past, there would be news about people digging up gold, diamonds, and other valuable treasures in parks and open spaces from time to time on the internet, so we can’t know for sure when everyone would go outside to hunt for treasures now and then. Recently, when two foreign miners were digging up rocks, they made an amazing discovery!

According to a foreign media 9GAG report, two miners were digging for ore on the border between Uruguay and Brazil doing their daily tasks when they accidentally found two sparkling amethysts with love patterns!

“It was a normal day at our mine located in the Catalan area in Artigas. The workers were just now allowed in the area to find more amethyst stones in the new mine,” elaborated Marcos Lorenzelli of Uruguay Minerals.

“After two or three hours, they moved a basalt rock and with the excavator machine, opened a heart-shaped amethyst geode — what a treasure!” explained Lorenzelli.

As soon as the news came out, not only did it immediately go viral on the Internet, but Lorenzelli also immediately expressed opinions on behalf of the two employees and explained that the recent mining is quite rugged, which made it very difficult to dig.

Normally, these two miners often feel physically and mentally exhausted due to long periods of work, so they can’t help but joke: “We are so hard at work, we are bound to dig some good things here!”

Although they have dug the treasure, they have not yet used the love geode for value appraisal, but after all, this is the return they finally got after hard work. The love amethysts they have discovered is irreplaceable and an unforgettable experience.

Many people were reacting with great surprise, saying that the rare stone looks super adorable. Others said that this might be a sign of love from the planet, and we ought to respond with love back at it, hinting at all of the human-caused climate change problems.

Now, this may be a unique find by Uruguay Minerals, but it’s certainly not the only heart shape that the company has as it transforms its geodes to assume a variety of shapes, including hearts, Christmas trees, and angels, among many other variations.

Here are comments of netizens who have read about the amazing love-shaped discovery:

Have you dug up anything priceless in the past that is very unforgettable?