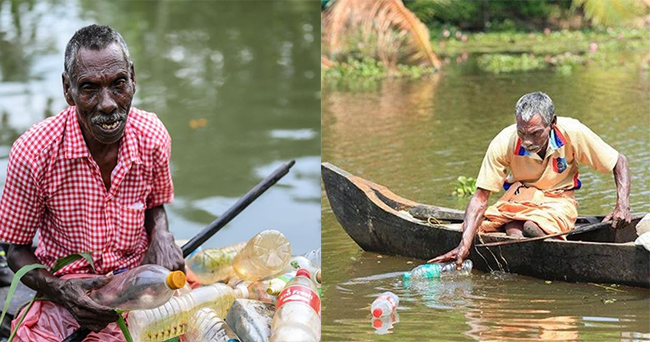 The heartwarming deed of a 68-year-old man who repairs the environmental damage that others have done has touched the hearts of thousands of people. He is a good example to everyone.

Rajppan Chettan, Kerala, India, rides his canoe daily to clean the river, collecting all the garbage he sees floating on the water.

Nandu, a photographer, was in the area taking pictures when he noticed what Rajppan was doing. He decided to take a photo of him which he then shared on social networks.

What caught his attention the most was that the man was collecting garbage from the river and had a disability with his legs, but that didn’t limit his willingness to contribute to the planet.

The people of the area know Rajppan very well, who every day tries to keep the river clean.

“I just do what I can,” said the humble man who collects plastic waste that he will sell to make ends meet.

Thanks to the plastic bottles he collects, he earns about US $0.16 a day (12 Indian Rupees) with which he can barely spend to eat.

The Prime Minister of India who learned about Rajppan’s case, thanks to the distribution of his photos, wanted to speak publicly to congratulate the photographer and the man.

For Nandu, he loves to photograph a man who shows everyone that there is nothing impossible if you have determination.

“I’ve always wanted to capture a moment with a living story, one in a better way than walking with a camera through my own city. Passing through various routes, paths, looking for stories. Hundreds of faces, people, houses, and more. But nothing seems as exciting as that day to me,” wrote the photographer.

Nandu is an engineer, but his passion is doing photography, so when he found Rajppan smiling and sitting on his canoe on the river, he insisted that storytelling through photos is what he loves most.

Nandu talks about when he met Rajppan…

“One day, on my usual trip, I was on a bridge over a river with a friend. He asked me to take his picture. As I did so, I saw the man in the boat, which was a common sight in our city. What made this scene different was that he took something from the river. What’s more, I saw how someone had left a bottle in the river as he approached. I became curious, so I took a picture of it,” he said.

Between Nandu and Rajppan, a friendship emerged which continues to this day.

“He smiled at me, and I knew the true meaning of being a photographer,” said Nandu.

Rajppan has won everyone’s heart, and Nandu shared his story which garnered admiring comments from thousands of people around the world.

“Rajppan Chettan can’t walk. He was born with this problem in his limbs. He had collected plastic bottles from the river. Now it all makes sense, why people give him plastic bottles when he gets close. Every day Rajppan, regardless of his condition, gets into his canoe, pedals across the Meenachil River, and collects bottles,” said the photographer who became his friend.

“His canoe is full of plastic bottles which he will sell so he can make money and feed himself. The townspeople were in great solidarity with him and left bottles in the river as he approached,” he added.

What Rajppan Chettan did, according to Nandu, is much more valuable than what we do.

“He cleans the river every day and at the same time makes a living from it,” he said.

The engineer and photographer confessed that he had always wondered what it would be like to find his passion and that he only discovered it when he met Rajppan.

He showed the photo to the humble man who smiled when he saw it. Since he shared the story, thousands of people have offered their support to Rajppan. His life has changed and improved greatly thanks to the solidarity that has emerged after his photos went viral.

Rajppan received an electric wheelchair, a new house, and an electric boat. Those were some of the gifts they sent him.

It’s great to see how social media can serve as an eye-opener and people to join forces, promoting solidarity with those who need it most. The Nandu Movement and Rajppan’s work are a source of inspiration to the world.