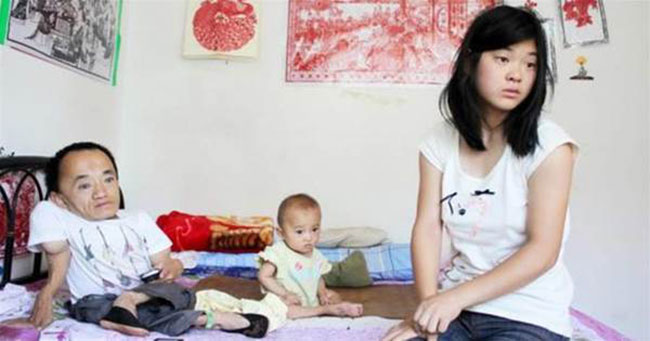 In China, there was a man who was only 70cm. tall. He eventually married and had children. However, his life became very sad after his marriage ended.

This man is a native of Shaanxi in China. He suffers from the congenital disease Osteogenesis Imperfecta, after reaching a height of 70cms., he can no longer grow.

According to Wikipedia, Osteogenesis imperfecta (OI), also known as brittle bone disease, is a group of genetic disorders that mainly affect the bones. It results in bones that break easily. The range of symptoms may be mild to severe.

Even though he suffered from the disease, he did not want to give up living a good life just because of his condition. He learned amazing drawing skills from his grandmother.

Through his own efforts, he won many awards and gradually gained a certain reputation. Many people came to ask him to draw. He also married a beautiful woman and had a beautiful baby.

What they didn’t expect was that the daughter had inherited her father’s illness. This is undoubtedly bad news for the whole family.

To cure the child’s condition, they spent all their savings, until finally their debts piled up and the burden was too heavy, his wife could not stand it and finally decided to divorce him.

While she has to take care of a sick child, she also has to find a way to make money. Now, her life away from her husband has become very difficult. The husband, on the other hand, is living in misery.

What are your reactions to this? Leave a comment.

This Chinese Family Decided to Workout Together to Live a Healthy Lifestyle; 6 Months Later They Are Almost Unrecognizable!