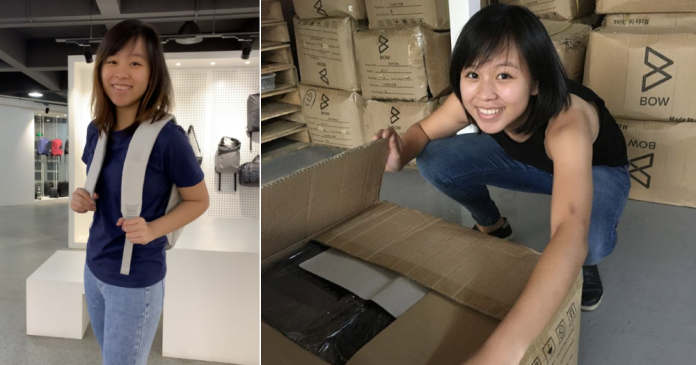 Taking a gap year in 2015, young Mandy Chan invested all her savings to a small business she created on her own, where she tried to create and sell a bag. This attempt failed epicly. Today, at 25, she is the co-owner of The Bold Company, an athleisure brand company worth millions.

Decided to take a gap year

At the age of 18, fresh out of school, Mandy Chan had no idea about creating any product. Her peers were enjoying an 8-month vacation before university was about to start, and Mandy was knee-deep in creating her product and making sales to people twice her age in the three different start-ups that she has interned at. Although she decided to take a gap year, Mandy still confirmed her attendance at the Singapore Management University in the coming academic year.

To everyone else, it was a no-brainer: Go to a reputable university, get a corporate job, and have a family before you turn 30. It was a path that was tried and tested for years that many people have walked. But there was something for Mandy that made her reconsider taking this path. With the thought running in her mind saying, “What’s the worst thing that can happen?” Mandy finally decided to take the whole year off school to pursue entrepreneurship full-time.

Lessons from getting cut off financially

Mandy Chan thought that taking a gap year from school was her boldest move yet, little did she know that it was just a start. It was during this time that her family decided to cut her off financially for two reasons: They wanted Mandy to be responsible for her choices, and they wanted her to go to a university to finish her studies first ASAP.

“I remember once I was left with less than US $20 in my bank account and couldn’t withdraw money from the ATM.”

Initially, Mandy felt so alone because she felt that her family was not supportive of her decisions, but in the end, she felt grateful and felt that it was a blessing in disguise because she was able to land different jobs such as being a copywriter for a marketing agency and was able to pick up skills that she may use in building her own business. The experience also taught her how valuable each dollar is, so it gave her second thoughts on spending them unwisely for personal entertainment purposes, and invest in the business, instead.

Prototyping, heading out to the streets & traveling to China alone

Whenever Mandy visited the gym, she almost always leaves her toiletry bag inside the shower rooms since she carried so many bags with her. She could not find the exact type of bag that meets her needs so she decided to create her own bag and sell it to market.

Being young and inexperienced was a challenge for Mandy. Her first 11 months were spent in a prototyping lab but unfortunately not seeing any good results. Mandy headed to the streets and bus stops, seeking validation and positive reviews about her ideas from strangers, up to the extent of standing on a pavement and sharing her product with the people waiting for a bus.

Survey forms that were returned to her shared negative results which made her hands tremble from double heartbreak!

It was then that Mandy realized that she needed to focus on group sessions with her target market instead of just random strangers. This way,m she can better understand their needs rather than assume what their needs were. Days passed, and she traveled alone to China in search of factories. She would take a 14-hour train ride with 5 strangers in a cabin and feared that she may not return home leaving her wide awake throughout the trip.

Once she has reached her destination, the boss of the factory asked her, “So, where’s your boss?” and Mandy had to awkwardly tell him that she was alone.

Despite all her efforts, her first product of bag on wheels was a total failure. After countless attempts to make the product click, the moulding alone had cost her US $20,000. The street surveys she conducted did not do the job either since the public did not like such a product. Mandy had poured her entire life savings and part-time earnings into her small business but decided to drop the idea since it was not doing any better. For several days, Mandy stayed in her room and cried herself to sleep. Unfortunately, she was back to where she started.

Mandy thought about throwing in the towel and do what everyone else has done – go to a university, get the degree and get a job. But her mind was made up, she wanted to make the most of the gap year since she has already made a promise to herself. Of course, to prove the naysayers wrong, too. She wiped her tears, stood up and got more driven than before, and said, “I must make it. I have to.”

And then, finally — a breakthrough

Her gap year was about to come to an end when Mandy finally had a breakthrough. Months of brainstorming and returning back and forth to the manufacturer, she had come to a product that was making it. BOW was founded in 2016 and the sweat bag was launched that year.

Mandy Chan was finally holding her first product, seeing it take form from the sketches and prototypes. She never forgot that sense of achievement and she felt even better than getting high scores in tests and exams. Her mentor then challenged her to be able to sell 1,000 bags in 2 months.

Mandy and her co-founder headed on to triathlon meets, basketball competitions, and even dragon boat events to further introduce the product to the public. They were able to meet their target market and they were hoping that they would gather more positive feedback to further improve their product. It was a tiring day for Mandy, though she admits that it was more of a happy kind of exhaustion.

Eventually, their big break came when Anytime Fitness Singapore master franchise Andrea Bell took a chance on them. Ms. Bell strongly believed in their vision, and Mandy has been very grateful to have her as a partner and friend, as well.

After 3 months, Mandy found herself back on the drawing board following the good feedback she received about the sweat bag. It was no longer about proving other people wrong, just doing her business because she liked and enjoyed it.

A long, bold journey ahead

In 2021, 50,000 products have been sold so far, with their product range expanding beyond just bags. They have crowdfunding online, Kickstarter, with their latest product, Pytho, which has been 61% funded in just 6 days. BOW, on the other hand, has been rebranded to The Bold Company.

Today, The Bold Company is not just a bag company, they aspire to be more. They also wanted to be a brand that can empower people and take a leap of faith and be bold, just how Mandy and her co-founder started the company.

“And my journey continues. I’m not sure how things would turn out but one thing is for sure – that being bold was how I started my journey and being bold will be how I continue this venture.” Mandy said.

More power to The Bold Company and you, Mandy Chan.