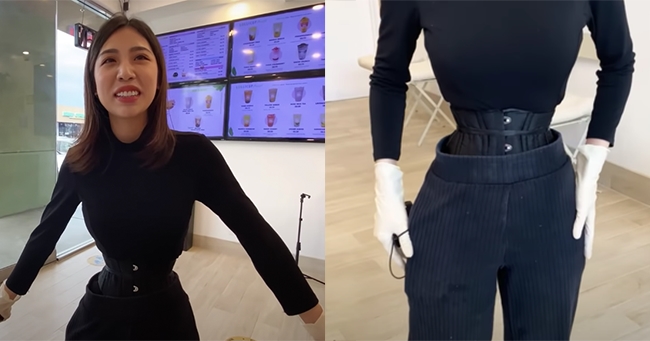 Vanity can get to some people sometimes. A young Vietnamese-born woman has gone to great lengths to reduce her waist to just 46 centimeters. She eats only one meal a day and wear a corset most of the time.

An Ky, a part-time dancer living in the United States, was discovered by popular Vietnamese entertainer Thuy Nga, during her last American tour, last winter.

While visiting the milk tea cafe where Ky happened to be employed, the Vietnamese comedian and television personality noticed the young girl’s tiny waist and decided to make a video about it.

She flaunted the young woman’s small waist and also asked a few questions about how she managed to reduce her waist circumference to only 46 centimeters and how she maintained her extreme hourglass shape.

Apparently, the part-time dancer has always wanted a body shape with a small waist that accents her hips and chest, and she is willing to work hard to achieve it.

At the age of 18, when she decided to make a change. She weighed over 50kgs., with a waist circumference of over 60cm., but today she weighs only 37kgs., which seems a bit unfit.

To reduce her waist size, 26-year-old An Ky went from eating three meals a day to just one meal, and sometimes even eating just once every two days. In addition, she stopped eating starchy foods 2 years ago and also wears a tight corset daily around her waist and only takes it off at night.

Asked if she wasn’t worried about the health effects of her diet, An Ky said that she eats lots of vegetables, chicken breast which is protein, and lots of fruit, so she never feels weak.

The only problem she complains about is the adjustments she needs to make when buying a new pair of pants. Due to her small waist, the pants also need to be tightened, and that can sometimes be “more expensive than the pair of pants itself.”

Thuy Nga’s video was posted on YouTube in January, but only recently went viral after an image of An Ky’s waist went viral on social media.

However, the feedback from the public was negative, with many claiming that her appearance looked unnatural, and some concerned netizens warned that covering her waist too tight could have a negative effect on her internal organs in the long run.

An Ky’s waist of 46 centimeters is very small, compared to the waist of Burmese student Su Ning, who claims to have a waist circumference of only 13.7 inches (34.8 cm).