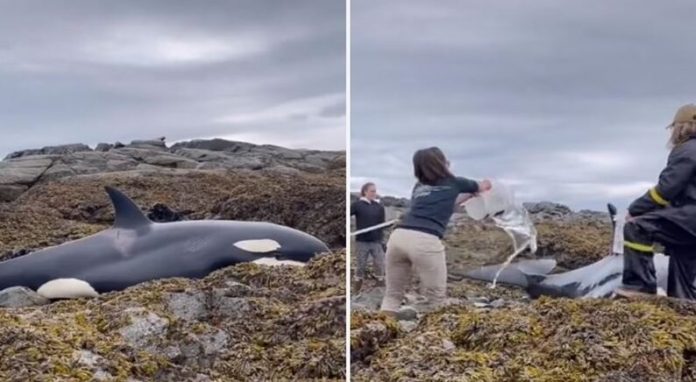 A killer whale caught between rocks off the coast of Alaska was on the verge of losing her life, but she made a dramatic escape. Thanks to the people who worked tirelessly for hours to save her.

This news was reported by The New York Times on the 29th of July.

According to reports, Aaron Melaine, a visitor to the coast of Prince of Wales, Alaska, recently found a killer whale stuck in a crevice between rocks. Aaron immediately notified the National Oceanic and Atmospheric Administration (NOAA).

The NOAA rescue team, which arrived around 9 am later, estimated that the orca, which is about 6 meters in length, was about 13-years-old.

It was confirmed that the whale was stuck in between rocks and was unable to return to the sea.

In response, NOAA, private yacht Captain Chens Strickland and his crew, and visitor Aaron Melaine launched a rescue operation for the killer whale.

Aaron posted a video of her at the time of her rescue on his Twitter on August 1st.

According to the video, people first sprinkled seawater on the killer whale with a bucket to keep its skin from drying out.

In the meantime, Captain Strickland’s and his crew made a passage to the sea quickly as the whale moved.

As people diligently carried buckets of seawater, the orca, gradually began to move.

Each time the killer whale felt the water splashing on her body, it lifted her tail in gratitude.

The rescue team then started spraying seawater on the killer whale using hoses and pumps.

After more than six hours of work, at around 2:00 PM, the tide slowly rose to the rocks and the killer whale swam and returned to the sea.

NOAA spokeswoman Jolie Fair said: “Once the seawater came back in, the killer whale started moving slowly. Then she swam away. Thanks to the efforts of the captain, crew, and many people around the site, we were able to save the killer whale.”