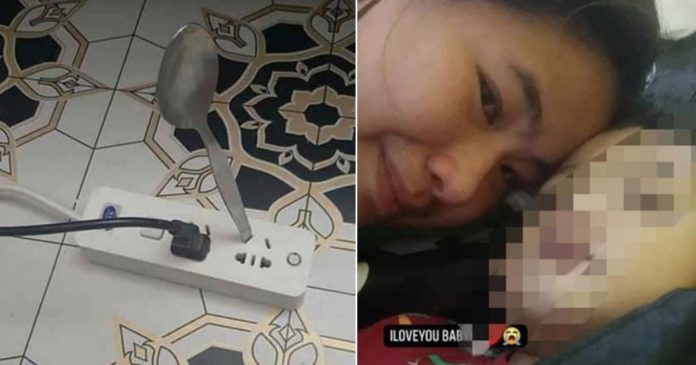 Parents who stay at home with their children should pay more attention to them, especially between the ages of 0 to 5. These are the ages when they are most curious. Recently, a 2-year-old child was electrocuted while playing with a spoon he inserted into an electrical socket. Where were the parents during this incident?

A few days ago, a tragedy happened in Quezon City, Philippines, wherein a 2-year-old boy named Jake Angara inserted a metal spoon out of curiosity in a plugged-in electrical socket. The child was electrocuted that instant!

According to China Daily, the boy’s mother, Eloisa Angara, found her son unusually quiet on Friday (February 19). When she hurried to him, she found her son lying on the ground, shocked, clutching the spoon inserted in the electrical socket. The mother started to panic!

“As I was about to open the door, I heard an explosion. I became nervous, but I thought something just fell,” Eloisa told the television show Saksi. “My husband screamed and said Jake was electrocuted,” she added.

The boy’s father immediately turned off the house’s power supply and examined his son. Jake had burn marks on his chest and abdomen. He was rushed to a hospital for treatment but he died.

After the investigation, police said that the boy was electrocuted on the spot when he plugged an iron spoon into an electrical socket, much to the grief of Jake’s parents.

It is a very heart-breaking tragedy! Parents at home should be wary of their toddler’s movements and whereabouts. They are very curious and will touch about anything they can get. Always keep the toddlers near and where you can see them.

“Accidents can happen if they are touched or if an object or finger is inserted into them when they are placed inside an outlet,” he said. “Don’t use them if they’re not really necessary because they’re really not safe.”