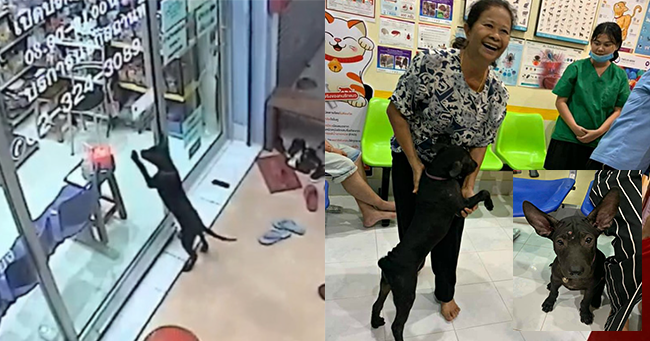 A 4-month-old black dog in Thailand is lost and doesn’t know how to get home. However, he decided to go to the veterinary clinic he had visited with his owner for help. After the clinic assistant noticed him, the doctor immediately called the owner, who finally came to pick him up.

The incident took place in the Samut Prakan Province in central Thailand. At 8:00 PM, the puppy appeared outside the glass door of a veterinary clinic and paced in confusion.

An assistant at the clinic who saw the dog immediately opened the door to check. At first, she had no intention of letting him in. However, the dog insisted. He barked and repeatedly pushed the glass with his front paws, then finally, the assistant then let him into the clinic.

From the footage taken by the clinic’s CCTV at that time, the dog can be seen wagging its tail and looks very happy after being allowed inside.

The vet at the clinic said the dog was very happy to see him. After checking the files, he found that the dog had been to the clinic to see a doctor before, so he called his owner, Sunee Bunwara.

Sunee went to the clinic to pick up the dog an hour later. She said that the dog went missing around 2:00 PM.

She was busy at the restaurant at the time, so she let the dog play with his furry friends. Unexpectedly, the dog did not return.

After trying to search, she couldn’t find him anywhere and finally gave up. She was thrilled to receive a call from the vet that evening.

Sunee also said that her dogs go to the clinic regularly for vaccinations after they are born. She and the vet believed the dog had lost its way but remembering the way to the clinic, he headed there for help. Sunee is finally reunited with her dog.

The clinic wrote on Facebook: “The owner is happy, and the dog is happy, too.”

This magician pulls off an incredible magic trick on Britain’s Got...