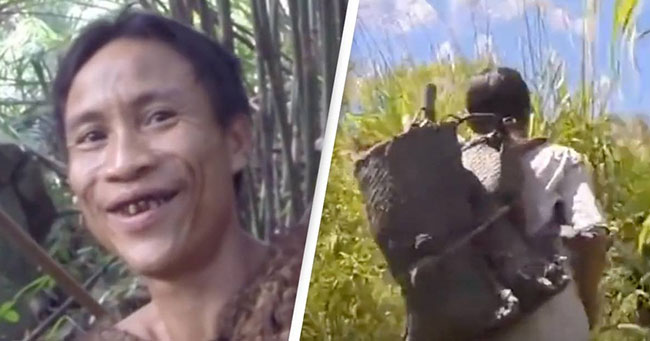 For 41 years, a ‘real-life Tarzan’ who lived in the forest did not know that women existed in the outside world. This is the extraordinary story of Ho Van Lang, a 49-year-old man who lives with his father Ho Van Thanh in a small village in Vietnam, eight years after the two men were ‘rescued’ from their isolated life.

Lang, his brother Tri and their father fled from civilization during the Vietnam War in 1972, after a US bomb killed his mother and two other siblings. Even now, his father has a “deep phobia of going back because he doesn’t believe that the Vietnam War is over” and hopes to return to life in the jungle one day.

As @docastaway reveals, Lang has lived most of his life deep in the jungles of Vietnam, in the Tay Tra district of Quang Ngai Province.

He is adept at hunting by any means necessary, he eats and lives completely in the wilderness, be it fruit, honey, monkeys, snakes, lizards, frogs, or other creatures. His favorite part of a mouse is the head.

When asked if he knew what women were, he said his father never explained it to him, but he had seen them in the village.

When they lived in the forest, they had only seen five women. At every opportunity, they ran away and hid from them.

Alvaro Cerezo, who tracked down the family in 2015, said: “They always run away when they see people from a distance.”

Lack of social skills has been one of the big hurdles to overcome for Lang.

“What’s even more surprising is that today, even though he can already tell the difference between a man and a woman, he still doesn’t know the basic differences between them,” Cerezo said, as reported by news.com.au.

“I can confirm that Lang never had the slightest sexual desire and his reproductive instincts never showed any desire in any aspect,” he added.

His brother described him as a “baby in a man’s body”.

“Lang doesn’t understand many basic social concepts. Lang had spent his entire life in the forest. If I ask Lang to hit someone, he will do it hard. He doesn’t know the difference between good and bad. Lang was just a child. He doesn’t know anything. Most people know what’s good or bad in life, but my brother doesn’t,” he said.

In addition, Lang also had a difficult first year as certain bacteria invaded his system for the first time.

Cerezo said Lang is happy to adapt to his new life and enjoys seeing animals friendly with humans compared to his previous life.

“Lang is probably the most adorable human I’ve ever met in my life, though, he really doesn’t know what’s good and what’s bad,” he said.

Lang, who has lived in the jungle for 41 years and returned to civil society and is just beginning to be “reborn,” says he is happy that each day of life is full of novelty… even though he’s 49-years-old…

Two students allegedly died from studying too hard in the college...