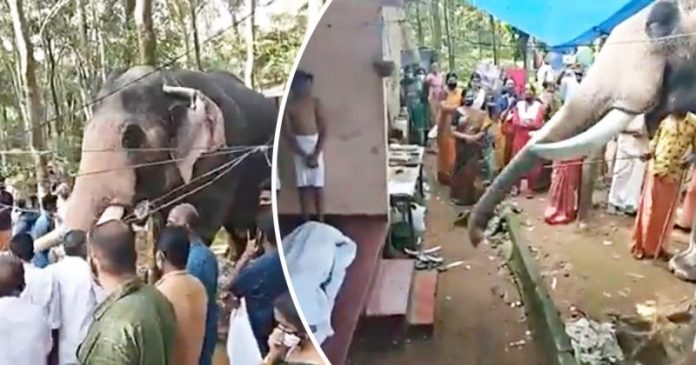 When an animal forms a friendly relationship with a human, its love is definitely deeper, unlimited, and unconditional. Naturally, they want to be loved in return, too. They know no favors and conditions, that is why a bond between a human and an animal is beautiful and meaningful.

In some situations that are definitely more touching, animals are also able to show the same feelings of love and sadness as humans when they lose a loved one.

This has been proven when an elephant from Kerala, India has walked 25 kilometers (15 miles) to pay his last respects to his late beloved human being, whom he considered his best friend for 25 years.

The News Minute reported Damodaran Nair, also known as Omanchetan, had died of cancer in Kerala’s Kottayam district, and previously the deceased was a Mahout or an elephant trainer who had been involved in that career for nearly 60 years.

Damodaran’s first encounter with an elephant named Pallattu Brahmadathan was bought by his two sons from its first owner 25 years ago.

Throughout his time as Mahout, Brahmadathan was Damodaran’s favorite elephant who even considered him as his own son.

A video that became viral on social media showed villagers and relatives visiting Damodaran’s funeral feeling deeply touched and saddened when Brahmadathan came to pay his last respects to the late Damodaran by lifting his trunk into the air.

Brahmadathan then respectfully turned and walked away slowly, leaving the funeral with a sad feeling after Damodaran’s son Rajesh hugged his trunk and held his ivory.

The heartbreaking video became viral with over 47,000 views on Twitter. On June 3, Damodaran managed to express his last wish when his health condition worsened, to see his beloved elephant best friend for the last time. A few minutes after staring at Brahmadathan’s face, Damodaran then breathed his last.

Considering Brahmadathan as one of their family members, Damodaran’s son Rajesh took him to the funeral from their home in Melampara to Lakkattoor on a 25-kilometer journey to fulfill his father’s last wishes and will, {The News Minute} reported.
https://www.thenewsminute.com/article/watch-elephant-pays-tribute-its-mahout-funeral-kerala-150087

Mourners crying loudly can be heard in the viral video, and it was very evident that the two had a very special bond of friendship and love when tears start dripping unconsciously upon seeing an incident like this, even only on video.

Watch with caution: (Not for the faint of heart!)