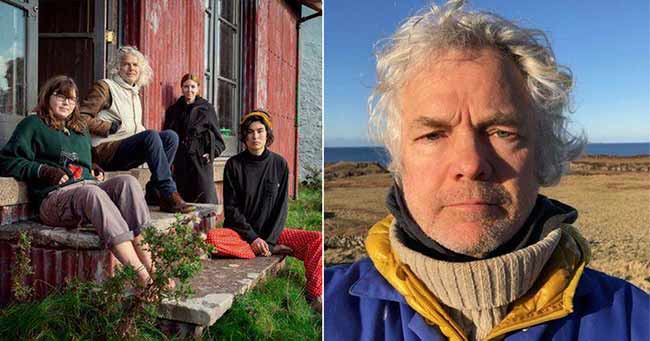 Many people want to escape the big city life at some point and go to the quiet countryside to live a comfortable life. This way of life is very calming and serene.

However, most people just plan and don’t go through with it because they cannot leave the comfort and convenient life that big cities give. Though this family dared to do it.

According to a report from Daily Star on May 18th, British billionaire Roc Sandford described how he gave up his luxurious life in the documentary “Go to Sleep” which was broadcasted on Channel W recently.

He chose to experience living in an old abandoned house on a private island far from the power grid.

It was reported that Roc was originally from London and was a relative of the very wealthy Rothschild banking family.

Gometra Island is located off the northwest coast of Scotland, very far from London, England.

Roc has adapted to an eco-friendly lifestyle. He refuses to provide electricity and heating for the house on the island, and he doesn’t even buy Christmas gifts for his children.

He simply wrapped some small antiques taken from outside in newspapers and gave them as gifts.

During winter, the temperature inside the house drops to about 2 degrees Celsius. Roc always wore several layers of clothing to keep out the cold, but he persisted.

“It’s a beautiful place, I love it, and I’m very happy here,” he said.

Roc brought the famous presenter Stacey Dooley to a tour around the house, and he explained, “There is no central heating system here, so winter will be very cold, tea got frozen a few days ago, but I’m still excited.”

Although Roc missed the convenience of having a washing machine, he was managing his life very well now, and he didn’t even mind eating food out of the trash.

He told The Sun that there was a lot of really edible stuff in the trash. If someone throws away good food, such as peppers or bananas, he or she will happily pick them up and eat them.

Roc is a vegetarian and grows most of his food, including Brussels sprouts, tomatoes, squash, and salad crops.

This ecologist and climate activist have raised about 300 sheep on the island. He hopes the island is completely carbon-free within the next four years.

Roc’s daughter Blue was deeply influenced by her father’s philosophy of life, and she also advocated protecting ecology, so she was called British Greta Thunberg by The Times.

But Blue humbly said: “I don’t like being compared. It’s not about Greta Thunberg, it’s about climate change.”