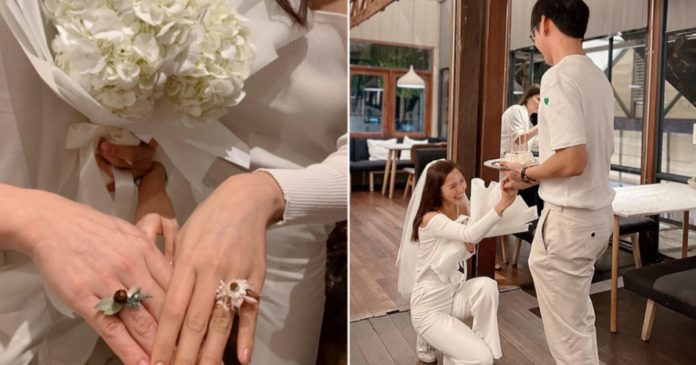 It has always been a tradition for people that the male gender is the one proposing to the woman when both parties want to settle down and build a family. Times have changed nowadays and people around the world have been proving gender equality to one another.

A woman from Thailand has proven this. On October 24, Piyaporn Yibmantasiri, wearing a white pantsuit and a bridal veil, knelt on one knee and proposed to her long-time boyfriend, Tanawat Chawigoon. He accepted and said yes.

#LetsMakeTheFirstMove #WomenCanAlsoChoose and #GenderEquality… these are the hashtags Piyaporn wrote on her post which she shared on Facebook alone. She was very excited to share the happy moment with the social media world. In an instant, her post went viral and garnered 12,000 shares and an overwhelming response from netizens, family, and friends.

“It’s a small step, yet very important,” Piyaporn said. “In terms of building a family together, this shows that we do not need to define that something is a duty of a man or a woman. Instead, we should start a family based on gender equality and mutual respect.”

Wannida Kasiwong, the founder of Wonders & Weddings, believes that proposing to a partner for marriage is a job that doesn’t necessarily have to be done by men only. Wonders & Weddings describes itself as a humanist, LGBTQ-inclusive planning service.

“For me, equally celebrated relationships and marriages are and can be so much more beyond gender roles,” she said. “The world has also been moving forward to create more equal societies. So we’ll be seeing more women proposing to their male partners and hopefully more double proposals too!”

For heterosexual people around the world, it is normal that the men do the proposing when offering marriages, though nowadays, behaviors and attitudes of both genders are shifting.

28-year-old Piyaporn said, anyone can propose to their partners, regardless of their gender. Piyaporn is a businesswoman and a former flight attendant and has been in a relationship with Tanawat for 5 years now.

“We’ve talked for some time about getting married. My fiance was pressured by some people to propose, which sparked the idea that ‘then I should do it,’” Piyaporn told Coconuts Bangkok. “I wholeheartedly proposed first because, no matter what, I am confident that he is the man I will marry.”

Piyaporn pitched the idea with her family and friends, who gave her tremendous support, and together they organized the surprise event.

“I thank Tanawat too, for accepting what I wanted to do and not feeling that being proposed to by a woman would contravene his masculinity in any way,” Piyaporn said. “What he has is a masculinity that accepts the equality of his soon-to-be wife, which makes it clear that our marriage will forever have respect for each other.”

“Society today is more open and understanding of equality, which is a great thing,” Piyaporn added. “In the end, it does not matter which gender proposes, because equality and mutual respect are most important to me.”

Congratulations to Piyaporn and Tanawat, and best wishes on your wedding day.