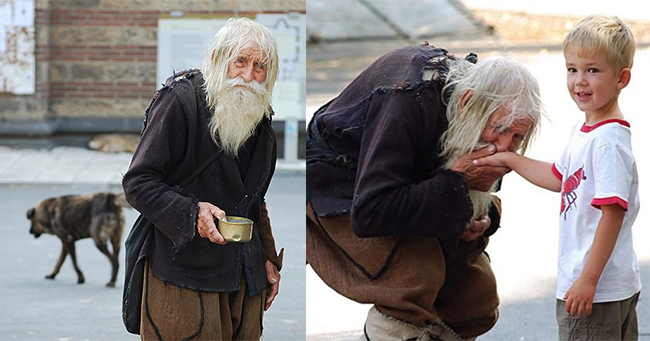 This old man’s name was Dobri, and most people would see him as a shabby old man. When his story was known, many citizens learned something important about judging people by their appearance.

This old homeless man can show you what it’s like to be a hero. He didn’t have many treasures, but he had compassion that was more precious than a pile of gold.

When you see what the elderly man does every day, you will realize that superheroes are real. They are not what you think, and here is the proof.

See this old man? This is why he is one of the best people in the world.

101-year-old Dobri Dobrev is a man who lost most of his hearing in the second World War.

He has spent decades traveling 15 miles on foot every day, wearing homemade clothes and leather shoes.

He travels from his village to the city of Sofia, Bulgaria, where he spends his days begging.

Surprisingly, Dobrev did not complain. He managed to live on only about US $100.00 (Rp 1.4 million) per month.

Over the years, he has raised more than US $50,000.00 (approximately Rp. 712 million) and has donated all of it to orphanages around the city.

He didn’t keep a penny of the money he earned.

Some call him “The Saint of Baylovo,” his birthplace.

He is respected by everyone and is often called ‘Dyado Dobri’ (Grandpa Dobri), and he represents the good that is done most unselfishly.

So, if you need a role model, this is one of them. Just by becoming a little like him, the world would become a much better place.

He could have used the money for his own benefit. He didn’t have to spend his days on the streets, but he did anyway, so he could give all his money to children without families.

Here is a video of Grandpa Dobri:

Thank you, Dobri, for all you have done. Share Dobri’s story!

Singaporean Woman Provides Back-Brushing Services to the Turtles; They Queued in Front of Her for Their Shells to be Cleaned

iPhone 13: Rumors and Speculations! Gossip about the Release Date, Prices,...