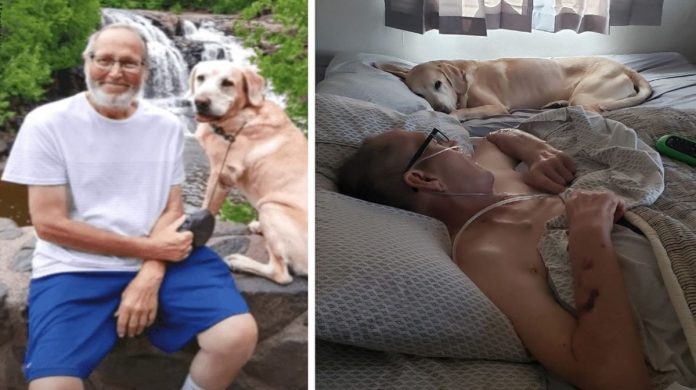 Until the end of their lives, a loyal dog will accompany its owner. A retired Air Force officer named Daniel Hove in Burnsville, USA has a dog named Gunner. Daniel has suffered from pancreatic cancer and has been fighting for 9 years. His pet dog has been faithfully guarding him.

In 2020, the seriously ill Daniel and the elderly Gunner left the world on the same day. Gunner took the step first, and after an hour and a half, the master reunited with him in Heaven.

▼Daniel’s daughter, Heather Nicoletti, said that before her father retired, he served in the fire brigade. In October 2011, he was diagnosed with pancreatic cancer and decided to retire and recuperate the next year. Over the past 9 years, his family and Gunner have been by his side.

“Dad and Gunner are the best partners. They are together wherever they go, and they even affect each other emotionally. Sometimes Dad feels upset, and Gunner is in a bad mood.”

▼Daniel’s condition has continued to deteriorate through the years, and Gunner has gradually grown older, and his physical condition is much worse than before. Later, Gunner suffered from a rare disease that caused swelling of his legs, and was unable to walk normally. When the family brought him back to the clinic, the veterinarian told them that it could not be treated.

After Gunner got home, he lay down on a bed next to Daniel to rest, and soon passed away. One and a half hours after Gunner left, Daniel also left the world. The family is very sad, but also feels very relieved, because Daniel and Gunner are no longer in pain and are finally together. They left on the same day and didn’t have to face the pain of losing each other. For them, this should be the best gift.

They are finally together in Heaven. Rest in peace, Daniel Hove and Gunner.