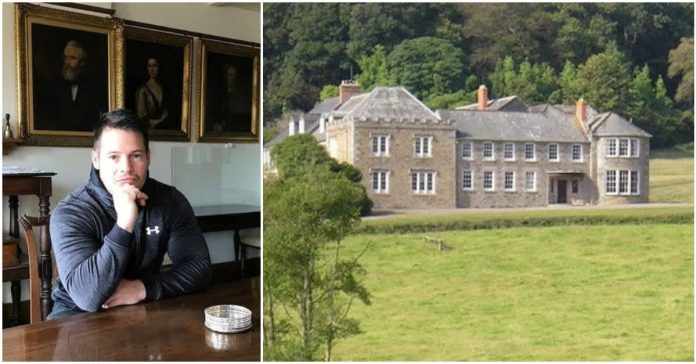 This has been one of the best level-up incidents in someone’s life! A man in Cornwall, England, went from struggling as a care worker to being the lord of a $60 million estate in a matter of days.

Jordan Adlard-Rogers has never experienced a lavish lifestyle. He struggled to work for a paycheck and often wondered how he was going to pay for his next bill.

All his life, Jordan always suspected that British aristocrat Charles Rogers, who lived on the nearby Penrose Estate, was his father. However, without an official DNA test result or Charles’ own admission, Jordan was never able to prove it.

One day, he decided to give the DNA test another try. Upon doing so, he received news that Charles has passed away and confirmed that Jordan was his son after all; making him the sole heir to Charles’ fortune.

Aside from receiving the keys to Penrose, a 1,536-acre country estate, He was also receiving $1,300 a week from the Rogers Family Trust Fund.

According to Jordan, he says he is now getting his “feet under the table” and no longer has to work.

The Penrose Estate is a 1,536-acre property in the countryside of Cornwall, England, and is worth $60 million, according to People. From generation to generation, the Rogers family has lived in the estate, which they bought from the Penrose family in 1771.

In August 2018, the most recent lord and owner of the manor, Charles Rogers, was found dead in his car. He was 62-years-old. Apparently, he left the estate with no heir.

Charles was a struggling drug addict and died of an overdose. After his death, a DNA test was done on Charles. It turned out that he did have an heir to the estate: a son, Jordan Adlard-Rogers.

Since he was a child, Jordan suspected that Charles was his father, but was never able to confirm the information.

The 31-year-old care worker grew up in a council house (a form of British public housing) and often struggled financially.

Apparently, after indeed discovering that he was the sole heir to the property and fortune, Jordan immediately quit his job and moved into the property with his partner, Katie Hubber, and their newborn son, Joshua.

First, though, Jordan took Katie for a vacation to New York.

Nowadays, he is getting to know more about the family he recently got to know and settling into his new life.

“I haven’t been here long and don’t know all the ins and outs but have been able to piece some of the puzzles together,” Jordan told Cornwall Live.

“Charles never actually lived in the estate. He lived in one of the estate’s farmhouses as his mum lived here, so he never got the chance to inherit it,” Jordan explained. “They died two weeks apart and his brother was also in line to live in the estate before him.”

“It’d got to the point when he gave up on himself and was living in his car instead of his house as it was such a mess,” he said of Charles Rogers, the father he never knew.

Since then Jordan thought a lot about what has led Charles’ struggle with drug abuse.

“There was always a pressure of him trying to match expectation. His brother was an RAF pilot and his dad was a lieutenant commander in the Royal Navy so he had big shoes to fill. He was under huge pressure taking it on, but he was different and a free spirit,” Jordan told Cornwall Live.

“Charles served in the Army in Northern Ireland and I think this affected him greatly along with the death of his brother, Nigel, from cancer who he was very close to.”

Jordan did his best to connect with his father through the years, though he was never successful.

“He offered to do a DNA test when I was younger but it didn’t happen and then when I was 18 I knocked on his door and asked if I could have the test and he told me to do it through the solicitors,” he recalled. “I was 18 so had other priorities at the time.”

“I wrote more letters in my twenties but never got a reply, then three years ago I got in contact with the power of attorney, Philip Care,” Jordan continued.

“Philip said Charles didn’t want to do the test, so I wrote one final letter with a DNA test kit enclosed and that was when Philip rang and told me Charles was dead.”

Finally, Jordan got the DNA test results, and it was confirmed that Charles was his real father.

In addition to being the new lord of the estate, Jordan reportedly now received $1,300 a week income from the Rogers trust fund.

The Rogers family gave the estate to the National Trust historical charity in 1974 as a gift, in exchange for a 1,000-year lease to continue living there.

Since then, the property became a public destination with trails, gardens, and holiday cottages.

The Rogers Family Trust produces income for the life tenant.

Jordan says he wants to help people with his new wealth.

“I don’t need to work anymore so want to set up a charity and help the Porthleven and Helston communities,” Jordan said of the two nearby towns, one of which he grew up in.

“I’ve been at the point of worrying about the next bill and have had a tough start in life but now I’m here I want to help people. I’m not going to forget where I’ve come from.”

Everyone may think that it’s a “happily ever after” ending, but it is not perfect as we may think. Jordan proclaims he will trade it all for a time with his father if it was possible. He would have helped him steer away from the life of drug abuse.

“People say I’m lucky, but I would trade anything to be able to go back and for Charles to know I was his son,” he said. “Maybe then he might have taken a different path.”

Singaporean Woman Provides Back-Brushing Services to the Turtles; They Queued in...