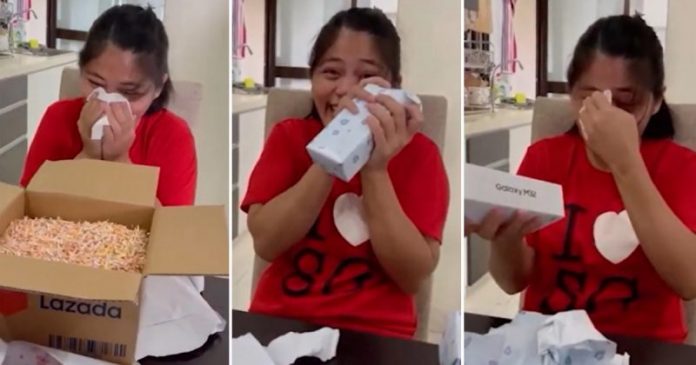 It is common for women from the Philippines and Indonesia to work as maids abroad. They serve for a family for several years until some gained the trust of the employer and are treated like part of the family.

A maid from the Philippines has been working for a family in Singapore for 9 months. But it was very touching when this maid was able to celebrate her birthday with her employer, and she was given a new smartphone as a gift, which left her spontaneously overwhelmed and kept crying.

Interestingly, the maid uploaded a video of herself on TikTok, receiving her gifts on Aug. 30 and it became viral, according to Mothership.

In the video, she opens her birthday present with a smile on her face and talks to her employer while wiping away tears several times.

She opened the gift and saw it was full of paper scraps. The employer asked her to remove a box hidden inside the big box containing the paper scraps and told her there were two gifts in it, there was Part 1 and Part 2. Wow!

When the maid took out the second gift, she seemed to be able to guess what was in it, and she was very excited as she told her employer, “Oh! This I know what this is… I know!”

And the employer’s son next to her couldn’t wait any longer to see what was in the gift. She answered, “I know this is a smartphone!”

Upon opening the gift paper, it was indeed a smartphone, and she could not believe what she saw, and this gave her tears of joy.

The maid thanked her employer while wiping away tears.

Her employer’s son became jealous and frankly said, “I didn’t even get a smartphone for my birthday!”

The Part 1 gift for this lucky maid is a Samsung Galaxy M32 smartphone.

The Part 2 prize is also eye-catching. There are 3 ‘beautiful casing’ options for the new smartphone the kind and considerate employer gave her.

The maid also uploaded photos of the food prepared for her by the employer’s family as they celebrated her birthday. There’s a cake with the name Jenebee, there’s fried chicken and even sushi.

She said in the TikTok video, after 9 months of working for this family, the employer gave her a birthday present. So she is very grateful and felt very happy.

Praises for her employer for being generous and kind, and Jenebee appreciates the trust and love that has been given to her.

When an employer gives a smartphone for a gift, this shows that the employer trusts their maid, and of course, they feel the good work performed by this maid may have satisfied the employer. So she deserves to be rewarded.

Although her working period was not long, it can be seen that the relationship between the employer and the maid was very good.

It is very lucky when you meet good employers and employees, and it is always necessary to appreciate these kind citizens and always be grateful.

A cancer-survivor himself, man’s dream to become a doctor comes true...