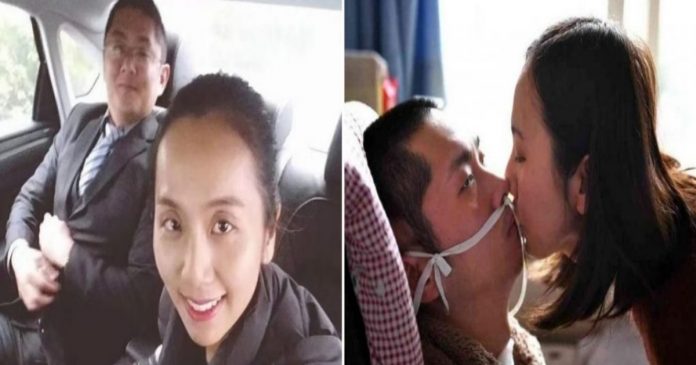 A “Miracle of Love”! She is an ordinary woman who has been in love with her boyfriend for only 8 months and is about to be married to him when he suddenly became paralyzed due to an accident. She had countless reasons to leave him, but she decided to stay. ❤️️️

From day to day until he entered rehab, she took care of her boyfriend for four years. Behind this “most heartwarming affection” is a kind-hearted girl’s perseverance to take good care of a paralyzed boyfriend, and bravery mixed with love that has created medical miracles.

Liu Ning was born into an ordinary family in 1985. She was a very sensible child. Not only did she perform well in school, but she also takes care of the housework with her parents. After graduating from a university, Liu Ning found a suitable job and the family’s life became better. In October 2016, when Liu Ning returned to her hometown, she ran into Peng Yalou in a melon field. Peng Yalou fell in love at first sight with the enthusiastic and cheerful Liu Ning, and since then he pursued her. Peng Yalou is down-to-earth and kind, and Liu Ning is cheerful and generous. The two soon fell in love and their relationship blossomed. Both parents also agreed when they both decided to be married.

In July 2017, the two had only met for ten months. However, no one thought that an accident suddenly had befallen the two of them. When Liu Ning came home from work, she felt a strong smell of gas as soon as she opened the door at home.

When she rushed to the bedroom, she found that her boyfriend Peng Yalou was unconscious, so she hurriedly called 120 (China’s emergency service number). When rescue arrived, Peng Yalou finally got out of danger.

However, due to the late arrival of the emergency assistance facility, some of Peng Yalou’s body parts were severely affected. Even though the vital signs recovered, Peng Yalou was still in a coma and stayed in the intensive care unit for a month. At that moment, the doctor diagnosed that he had become in a vegetative state and might not be able to wake up again. The news shocked Peng Yalou’s mother and Liu Ning, and felt that they lost hope.

When Peng Yalou’s parents divorced when he was young, he lived with his mother, Ge Yumei. Later, his mother remarried and gave birth to his younger half-brother. His mother was also in charge of all the affairs of the family. Peng Yalou fell into a coma, and the pressure on his mother increased. For Liu Ning, what happened to her boyfriend saddened her so much.

“Do you want to stay and take care of him? Will he really be unable to wake up? What if he wakes up and is disabled?” One problem after another circled in her mind. Liu Ning was restless while staying outside the intensive care unit, and weight loss has become visible on her. After struggling for a long time, she thought of the happy times with Peng Yalou before, and thought of their plans for marriage and the future, Liu Ning finally made up her mind.

For her, she has countless reasons to leave, but she felt that her conscience is overwhelming. No matter what happens in the future, she never wanted to have regrets in her heart. When she called home to tell her parents of her decision, they fell silent for a while, but finally sighed and gave their permission to her to take good care of Peng Yalou.

When Peng Yalou finally came home to recuperate, the task of taking care of Peng Yalou took its toll on his mother Ge Yumei and Liu Ning. At that moment, Peng Yalou had no other vital signs except his breathing and his heartbeat. He was lying motionless in bed, completely incontinent to defecate and unable to open his eyes. The doctor told Liu Ning that if long-term inactivity would cause muscle atrophy, she was asked to give Peng Yalou a massage.

At that time, she was only more than 80 pounds. Peng Yalou, who weighed almost twice her weight, was too heavy for her as she struggled to even help him turn over. But on weekdays, whenever she had time, she would follow the doctor’s instructions to massage Peng Yalou, from arms to feet. Even at night, Liu Ning slept very unsteadily, worried that sputum would block his trachea and affect his breathing, so she would get up every moment to pat his back and help him spit the sputum.

The most difficult thing for Liu Ning was to take him to rehabilitation, and she needs to hold him in a wheelchair. Her boyfriend’s dead weight was twice hers and at that moment, Peng Yalou could not cooperate. What she would do was carry him with the strength she has left just to hold him up.

One day, there was a small earthquake and they both fell to the ground. She took her boyfriend back to the bed and wiped his face. At this moment, Liu Ning saw tears in Peng Yalou’s eyes. Seeing her boyfriend finally reacting to situations around him, her heart leaped with happiness. Liu Ning felt that no matter how hard it was, or how tired she was, it was worth it.

Knowing that Peng Yalou had gradually regained consciousness, Liu Ning began to chat with him, telling him about situations at home, and about their future together. Peng Yalou’s condition also gradually improved. Liu Ning took good care of Peng Yalou without complaint and regret, which moved his mother Ge Yumei very much.

After Peng Yalou had his accident, Ge Yumei sold her family’s house, and the money for hospitalization was loaned from family and friends. However, the family was still under tremendous financial pressure. The psychological pressure was becoming overwhelming, Ge Yumei often cried to herself. And Liu Ning’s persistence gradually gave Ge Yumei hope and gave her the strength to support her family.

After a year of hospital confinement, Peng Yalou’s condition has improved a lot, and the doctor also advised him to go home and continue his rehabilitation. The doctor’s words made Liu Ning feel hopeful, and took him to a house she rented. Liu Ning stayed by Peng Yalou’s side for more than a thousand days and nights.

To take care of her boyfriend, she quit her job, and she has so many debts without any income. To relieve some of the financial pressure on the family, she resorted to her boyfriend’s previous job and broadcasted it online, selling melon seeds. At the beginning of 2019, after the doctor’s diagnosis, Peng Yalou had changed from a moderate coma to an awake coma. At this time, he was able to respond to Liu Ning’s words, although it was just a simple haha, which made Liu Ning and the family very happy.

Later, as suggested by a friend, she began to shoot and record daily small videos, and the stories of the two gradually became familiar to everyone. The simple video contains her meticulous care and deep love for Peng Yalou.

The story of Liu Ning and Peng Yalou touched many netizens. On her social account, netizens commented every day, wishing Peng Yalou could recover soon, and even netizens sent her healthy food and snacks. Although there will inevitably be discordant gossip, she doesn’t care about these, all she wants is to support the whole family.

In addition to the vast number of netizens, the streets and communities are also actively helping them both. Not only helping them with finances but also organizing donations to help them tide over the difficulties. The community volunteer service team where Liu Ning works has also set up a group to help her deal with sending and receiving goods.

Peng Yalou’s situation is getting better every day. Faced with so many people’s concerns, Liu Ning is also very moved. After years of taking good care of him, she also fulfilled her promise to Peng Yalou: “Even if fate abandons you, I will not.” Liu Ning’s story touched countless netizens. She supported his family with all her love, and that’s why she had the “medical miracle” given to Peng Yalou.

Russian couple separated by war, reunited and remarried after more than...