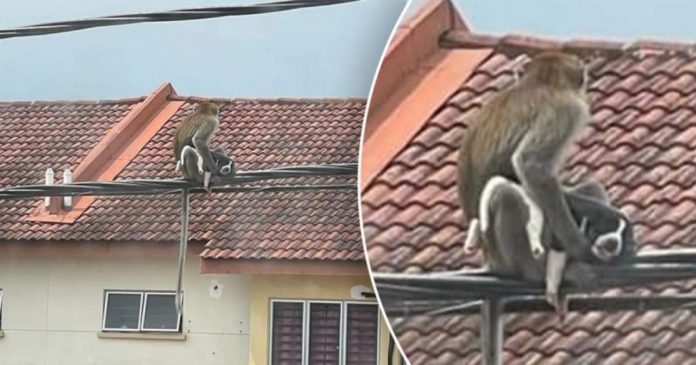 Monkeys are clever and cunning animals but can sometimes pose a danger not only to humans but to other animals as well. Their nature is indeed rude and can hurt anyone who tries to fight them.

Their actions can become increasingly severe and difficult to control, like an incident that happened recently. In a Facebook post that went viral a few days ago, netizen Leonald Lu shared his experience of an incident involving a monkey in a residential area in Malaysia.

According to Lu, there is a residential area in Taman Lestari Putra that is often visited by monkeys to ‘kidnap’ the residents’ pets.

Along with the brief status, there is also a picture uploaded proving a monkey is sitting on a wire along with a puppy that is kidnapped. Until now, it is still unknown who the owner of the dog is, and most likely the puppy belongs to the residents of the housing estate. The situation is now getting more serious than it seems. Monkeys are not only stealing and snatching human food but are now daring to kidnap pets, too.

The 2-week-old puppy, now named Saru, was abducted by the wild monkey and taken above an electricity post in Taman Lestari Putra, Malaysia, on September 16. The primate kept its hostage for 3 days.

Video footage from another resident of the area shows a heart-stopping incident wherein they tried their best to rescue the poor puppy.

The video shows how the 3 rescuers planned on saving the puppy without harming the primate and the dog, who were perched on a tree. They tried to throw stones and small pieces of wood in hopes to scare the monkey away and leave the dog. Finally, they decided to throw loud firecrackers on the ground to startle the monkey, and the plan worked.

One of the 3 girls, Cherry Lew Yee Lee, said: “The puppy looked tired and weary, but the monkey did not seem to hurt it. The monkey was just holding the puppy while it moved around. It looked like it was treating the puppy as a friend or its baby, it was very strange. However, we still needed to save the poor dog because it appeared to have been starving.”

Cherry and the others kept coming back to the place where they spotted the primate, but it always outran them whenever it realized they were trying to rescue the puppy. The monkey would run up the electricity post then on to a nearby jungle.

Upon its rescue, they immediately headed to the vet and checked the puppy for injuries, and decided to adopt it when the dog turned out well.

This incident suggests that this may be the reason why some pets disappear. Saru, however, is believed to have been snatched from a stray dog’s litter.

The Malaysian government receives an average of 3,800 complaints from the public about monkeys nationwide every year.

Always be careful in areas where you live. Keep the door of your house closed, and don’t leave your pets outside unattended.