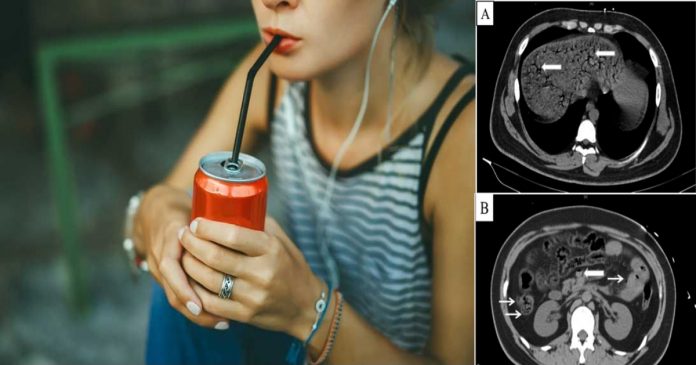 CHINA – A 22-year-old man has died after chugging down 1.5 liters of Coca-Cola in 10 minutes. According to the doctors, the man’s sudden death was due to the consumption of carbonated drinks, which caused the accumulation of gas in the body thus making his heart lack oxygen.

The unidentified man is believed to have gone to the hospital six hours after he took the drink. He informed the doctor that he took the drink to cool his body due to the hot weather before starting to feel symptoms such as pain and swelling in the abdomen.

Doctors also confirmed that the man had a high heart rate, low blood pressure and was breathing fast. CT scans found the presence of unusual gas on the intestinal wall and blood vessels. The test also found that the man suffered from Hepatic Ischemia which is also referred to as “shock liver”, a condition defined as an acute liver injury caused by insufficient blood flow (and consequently insufficient oxygen delivery) to the liver.

The doctor immediately gave treatment to release the gas from the man’s digestive system. He was given medication to protect his liver organ and stabilize other bodily functions from further damage.

But after 12 hours, blood tests showed the man had serious liver damage, and he died after 18 hours of treatment at Chaoyang Hospital in Beijing.

However, a biochemist from University College London, Professor Nathan Davies, doubted the fact that the man died as a result of consuming carbonated drinks and he wanted the party involved to provide an authentic report to confirm the real cause of the man’s death.

“Drinking 1.5 liters or more than 3 glasses of soft drinks will not cause death. The chances are slim. Usually, this condition occurs if there are bacteria that enter the intestinal tract and in this case, the small intestine.”

“Of course, carbonated drinks are not good for your teeth, that’s the main thing. Consumption of carbonated beverages in large quantities can affect the mineral content in the bones.”

He further explained, “Drinking a few fizzy drinks a day will not cause health problems except for the level of sugar you take.”

Professor Nathan also explained that if carbonated drinks could be the cause of death, there would definitely be many other cases in the world caused by the consumption of these drinks.

Taiwanese bodybuilder and fitness guru shocks many after suffering from a...