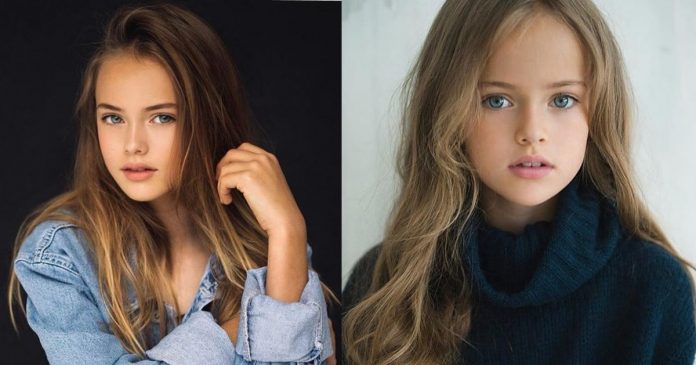 The most beautiful girl in the world has grown up! The cute little Russian 3-year-old has a doll face and goes viral on the internet. When she turned 15-years-old, the blonde beauty evolved and has a face like an angel. ❤️

Russia is one of the largest countries in the world. There are also many beautiful Russian women, and even the children have the particular looks to be a model. Introducing Kristina Pimenova, who has the title of “Child Supermodel”!

Pimenova was born in Moscow, Russia in 2005. Her father is Ruslan Pimenov, a former Russian football player, and her mother Glikeriya Shirokova was a former model. She is the acting agent for her daughter’s modeling career.

Pimenova, who inherited excellent genes from her parents, was favored by the fashion industry as early as 3 years old. She modeled for famous brands of children’s clothing such as “Armani Kids” and “Roberto Cavalli Junior”. She appeared on the cover of the fashion magazine “VOGUE” at the age of 7. The Italian edition of the magazine also published a special article to introduce her, an article on her influence!

In 2014, 9-year-old Pimenova received global attention for her fashion photos. Many people were fascinated by her captivating blue eyes.

Pimenova looks like a human angel, and she was named “the world’s most beautiful girl” by netizens!

After 4 years, 13-year-old Pimenova’s face has changed, saying goodbye to her past beauty as a child. Now she has the charming characteristics of a young woman, and her facial features like a doll. So beautiful!

She has bright blonde hair like she did when she was a child. From the photos of Pimenova’s life, she can also be seen as a confident, a bit shy, and a playful girl.

Her charming blue eyes, delicate lips, and clear skin with no chubbiness, belong to an angel sent by God into the world!

Wearing a large-size denim jacket and bangs combed to the side, Pimenova looks more like a mature woman~

Men and women alike will be mesmerized by Pimenova’s stare.

Currently, Pimenova still shines in the modeling industry, shooting all kinds of fashion styles. In addition, she has also won gymnastics competitions. She has good looks, but she also depends on her strength to represent her age group in the sport!

Since she was a child, she has had the beauty representing her country and city. Soon, Pimenova will still have her looks to make everyone amazed!

Let’s take a look at the now 16-year-old Pimenova. Her beauty is the best gift God has given her! She is the envy of most women, as of late.

Note: You may check out the original post on Kristina Pimenova’s Instagram page via the links under the photos.

Finally, let’s enjoy some of the most brilliant photos in her modeling history~

After seeing so many beautiful photos of Pimenova, many would agree that she is one of the most beautiful faces that graced on earth.