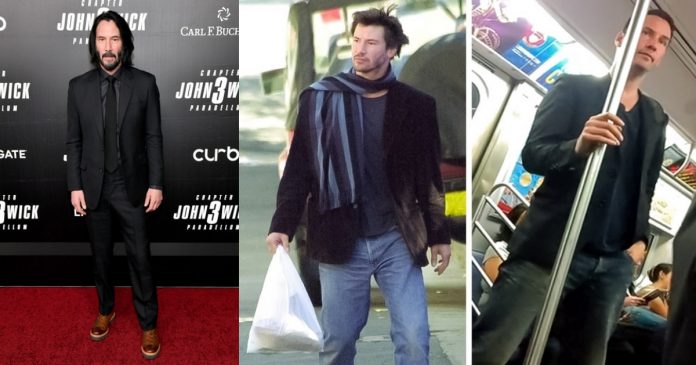 57-year-old Canadian actor Keanu Reeves has become a global sensation with movies such as “The Matrix” and “Speed”, establishing his status as a first-line actor in action movies.

Despite his high celebrity profile, he is a well-known civilian superstar in Hollywood. After he finished filming “The Matrix”, he generously gave up to 90% of his pay to the staff and helped 12 stunt performers buy new automobiles. The reason why the film is so successful is “Thanking the team behind the scenes!”

Although he is a world-renowned superstar, Keanu Reeves has always lived a simple life. He does not have a mansion or a sports car. He chooses to live in an ordinary apartment that is affordable for ordinary people and has no expensive interior stuff. He has clothes that can be worn for 30 years. He likes to keep his life private. He has been stalked by the media and chatted with homeless people many times, without the aura of a big star.

Keanu Reeves, who is approachable, usually uses public transportation to go to and from his destination. Recently, some netizens revealed that he was accidentally captured on video when he was on the subway in 2011, which once again caused a large number of fans to buzz!

In the video, you can see Keanu with short hair, a black shirt with a jacket, jeans, and a simple but very handsome appearance. Even if he is casually dressed like an ordinary person, it is impossible to ignore that he is a superstar.

It was peak hours at the time, and many passengers were busy getting on and off the train at each station. At one time, a woman carrying a large bag walked into the carriage and then stood beside Keanu Reeves.

Keanu inadvertently looked in the direction of the woman and saw that the other party was carrying a big bag, which looked very heavy but chose to stand since all the seats were taken. Keanu did not hesitate to offer his seat to the very grateful woman.

Immediately, Keanu gathered his bag, got up, and gave way to the woman, who nodded and thanked him and then sat down.

Keanu Reeves also carried a big bag but gave his seat to the woman without hesitation. He walked to the side of the pillar and stood the rest of his journey. After several stops along the way, his gentlemanly behavior was also photographed by the people on the train. Once it was posted on social media, the video and photographs have accumulated more than 30 million views so far!

Many people are moved by Keanu Reeves’ gesture.

“Having an unattainable celebrity reputation, he is still an ordinary kind man in private.”

“I liked him for a long time, he always has a good reason for people to always supporting him in any way!”

Although it has been an incident several years ago, talks about Keanu Reeves’ gentleman behavior is still unabated. It can only be said that Keanu is a rare celebrity in Hollywood. He is a wonderful person who really deserves to shine on and off camera!