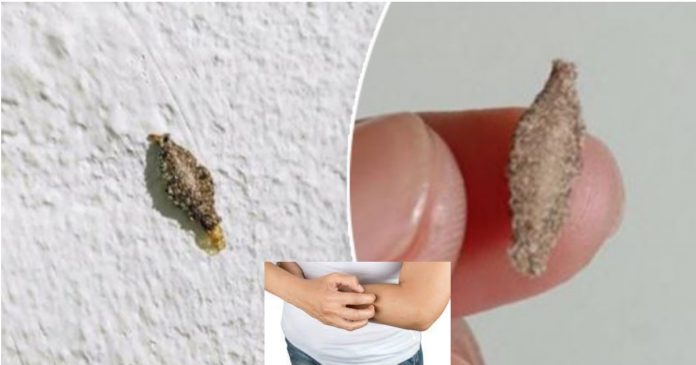 The Kamitetep may be small in size, but it can cause bruises and itching on our skin. They look weird, but you’ve definitely seen these small-sized caterpillars that often cling to walls and furniture in the house, more often than not.

Some people do not know that it is a species of caterpillar that can cause bumps, bruises, and itching on the human body. The cocoon, species ‘phereoca uterella’ can cause bruising as a result of its bite that leaves a “hair” as big as a needle.

According to Wikipedia, Phereoeca uterella is a species of moth and is commonly known as the plaster bagworm, and it is often called the household casebearer. It is found in warm, humid climates throughout the states of America. It is common in houses.

The effects of the bruises may last for weeks. Usually, these caterpillars will leave hairs where they sting or bite the human skin. It is that hair that will cause bruising and swelling, with severe pain and itching. The itching caused by these caterpillars can be treated by applying anti-itch cream or ointment.

The larvae in it live in shells that form a flattened sheath, while the outside cocoon serves as the process of metamorphosis into its final stages.

The cocoon is also composed of silk fibers mixed with sand, and dust, and even of soil.

Usually, the cocoon has an exit from the front or back or in both directions to facilitate the movement of larvae in and out.

Even so, the larvae only come out halfway and will not come out completely only when it wants to find food.

According to sources, this larvae which is a moth with a length of about 13 millimeters will produce 200 eggs in one cycle. The eggs that hatch will become such cocoons and live in a hidden place in the house.

These larvae also love to eat cloth and often attach themselves to spider webs, as they like to eat small spiders.

Since these animals love warm temperatures, and attach to walls inside the house, always check for hidden locations indoors regularly, especially parts of the house that are the warmest!

A 22-year-old Man Died After Drinking 1.5 Liters of Coca-Cola in 10 Minutes