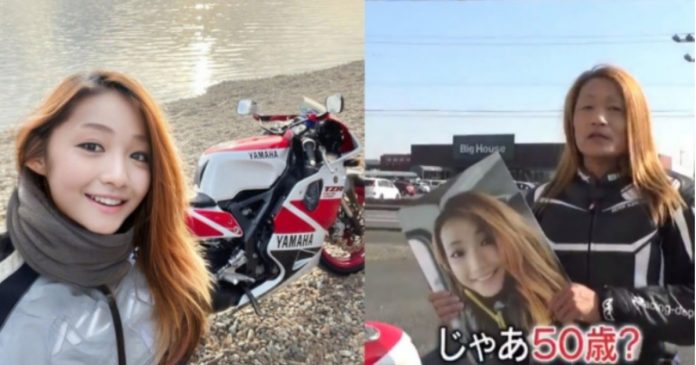 When FaceApp went viral globally, citizens who have downloaded this app on their mobile phones tried face-swapping with other genders or famous people, just for fun. Photos became instantly viral when shared on social media and face-swapping became a trend for some time. Although, a 50-year-old male Japanese biker took it too far by swapping his face on photos with a beautiful young woman.

A young female Japanese motorbike rider is actually a 50-year-old man using a FaceApp, and the internet is shocked with what they have discovered on her Twitter account, which had thousands of followers.

To her 18,000 followers, Twitter user @azusagayuki projects the image of a young and beautiful Japanese motorcycle enthusiast who poses for selfies beside her Yamaha motorbike and goes out for a joyride.

While her followers had no clue who was really behind the Twitter account, some hawk-eyed netizens have noticed something not right in a recent photo that she had shared.

In a photo that she has shared on her Twitter account on February 11, some followers noticed that the person who took the picture behind the rearview mirror was a middle-aged man.

It has called upon the attention of a Japanese variety show, so they tracked down the biker from Hokkaido to confirm the discovery.

On the Monday Late Show which aired on March 15, the hosts and crew were all shocked when the biker revealed her face by removing her helmet. ‘She’ is actually a 50-year-old man with the same blonde shoulder-length hair as the girl in the photos.

He introduced himself as Souya, and he shared on Live TV that he used a face-changing app to transform his original photos and look like a beautiful young woman in her twenties.

When the talk show hosts asked Souya why he did the transformation, he says he just enjoys being “kawaii” (cute.)

“I want to share pictures of myself riding a motorcycle, but no one wants to see an old man,” he said.

Souya said that when he initially signed up for a Twitter account in 2019 and posted photos of his motorcycle adventures, he was not able to attract the number of followers he wanted.

But when he started posting photos of himself as a young woman in her twenties using a FaceApp just for fun, he immediately gained 1,000 followers. Since then he decided to continue posting photos using his online female persona.

“Catfished!” was the word most of the followers used upon learning the truth about what Souya has done, though most of his fans had some sense of humor and took it lightly. They were able to accept the truth.

“This sounds like a new kind of VTuber (virtual avatar) and it’s interesting! I want you to continue even though you got caught. I support you!” said a Twitter user.

Meanwhile, another netizen said, “I watched this on the Monday Late Show and when I learned that he was a man, I was mostly surprised that his hair was real!”

Watch the 2-minute hilarious segment of the talk show here:

Although most people warn to fully assess who is behind each social media account we want to follow, it is good to know that some users have a sense of humor that will deceive us but can be said to be “safe.”

Can be grown in both soil and water, this lucky bamboo...