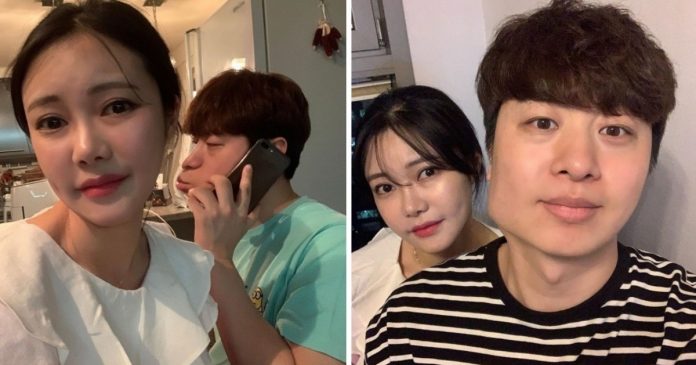 It has become a habit of many people to edit the photos they have taken on their digital cameras or mobile phones, and many of these people’s social media timelines are full of unusually hilarious selfies. Nowadays, most social media accounts are filled with these photos that most people find very funny.

A girl in South Korea often posts photos with her husband on IG. She is very beautiful in the photo, but her husband has various facial deformations, just like a cartoon character. Using a face app, the wife would edit parts of her husband’s face, then post them on her Instagram account. The outcome is hilarious!

▼This loving couple is very famous. The man is a 41-year-old South Korean comedian, Liu Xiangxuan. A few years ago, he needed to be hospitalized due to physical injuries. Unexpectedly, he found his life partner and current wife, Kim Yan-Chi, because of a blessing in disguise. The love story of the two is romantic and warm, which instantly became the talk of the town.

▼This couple has a great sense of humor. The photos posted on IG after they got married have various facial deformations, just like caricature drawings. Kim Yan-Chi likes to take beautiful selfies, while her husband Liu Xiangxuan, who is standing next to her, is edited, and his face is hilariously deformed every time.

▼In a photo of the couple, as long as Liu Xiangxuan is too close to his wife, it would be easier to edit to an exaggerated degree. Netizens couldn’t help laughing after seeing the photos, though some fans of Liu Xiangxuan complained on his behalf: “Please think about the people around you when you edit the pictures. At least, you must maintain respect.”

▼For the sake of her own beauty, she transformed her husband into an alien in the photos. 😂