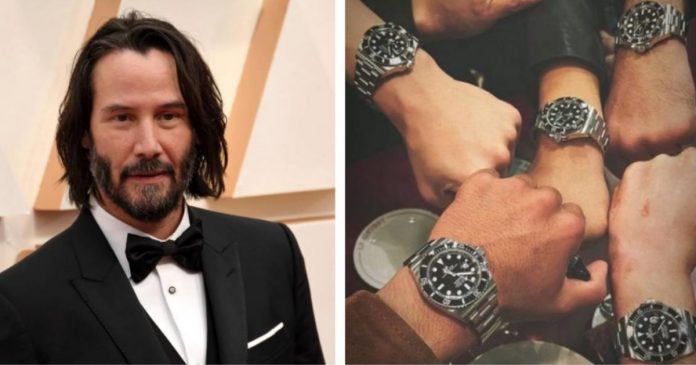 John Wick: Chapter 4 has just finished filming and has wrapped up. As a token of his appreciation, he has given each member of his entire stunt team, all four who have been with him since the first John Wick movie, a Rolex Submariner.

There were personalized messages engraved in each Rolex watch which included the words, “The John Wick Five”. The stunt team was comprised of Bruce Concepcion, Jeremy Marinas, Dave Camarillo, and Li Qiang.

The team received their surprise gifts last Saturday, October 23, when they wrapped up filming in Paris. Stuntmen Concepcion and Marinas expressed their gratitude by sharing photos of their watches on Instagram, wherein Marinas called it the “best wrap gift ever”.

At $9,400 (RM 39,000), a steel Rolex Submariner is very much coveted among watch enthusiasts though it is known to be hard to get hold of unless a buyer gets it in the grey market at a very high price or is a super celebrity like Reeves.

57-year-old Keanu Reeves is a Hollywood celebrity with a Mr. Nice Guy image. He is also known for his generosity.

After filming an intense brawl scene in the 2003 movie The Matrix Reloaded, Keanu gave each of his 12-member stunt team a Harley-Davidson motorcycle.

This December, Keanu Reeves will be seen again on the big screen in his new movie, The Matrix Resurrections.

Here is a video of the story: