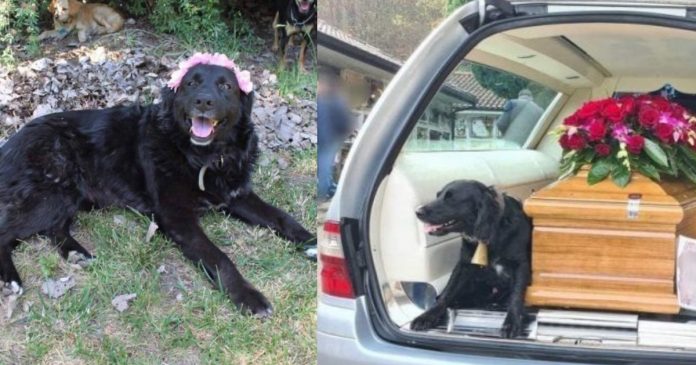 Dogs have long demonstrated the degree of loyalty they can keep to their owners. Anyone who has a pet at home knows that when they get home, these loyal animals will be waiting for them. These pets have done countless favors for us without asking for anything in return.

A dog who has always been with her human Dad her whole life is willing to accompany him forever, even if that “always” is until their passing. Various pets have shown the same loyalty to their owners and here, Lessie’s story reminds us how loyal and unconditional a furry friend can be.

Lessie, whose name was based on the movie, lost her human Dad a few months ago, a man she has shared her whole life with. Confused and with her heart shattered, Lessie did not want to part from her owner’s coffin during the funeral ceremony, even for just a moment.

It seems that Lessie was oblivious to the fact that her human had to be put in that little box which, for her, looked so uncomfortable. She wasn’t sure what was going on, so she preferred to accompany him at all times and continued to protect him.

Lessie’s photographs at the funeral gave much to talk about on social media after one of those present decided to share them on Facebook.

With her languid facial expression and without making much movement, the dog climbed into the hearse that moved the body to the cemetery.

The dog, with a bell around her neck, demonstrated exemplary behavior and honored the memory of her owner with her presence.

The image of Lessie inside the vehicle on one side of the coffin, next to the flowers, and with an immense burden of unhappiness in her eyes, was worth it for the man’s relatives to take pity and decide to keep her.

Lessie’s life must go on and his image will be etched into the memory of many as the most beautiful sign of pure loyalty. After recovering from the absence of her owner, Lessie has received the blessing from so many people applauding her behavior.

“God bless this little dog. They are a man’s best friend and never forget their owners even if some of them have been bad,” one woman wrote on Facebook.

No doubt dogs are angels on this earth and because Lessie does not deserve to be alone, she shares this emotional story that has become the epitome of undying love and loyalty. She now lives with the deceased man’s family.

A tired cat is believed to be dead on a car...