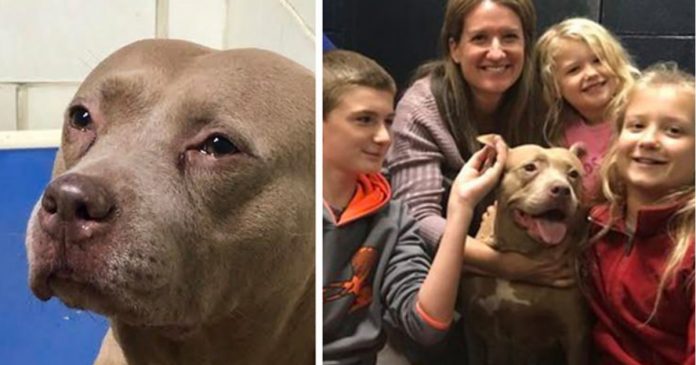 There are times when even the hardest of hearts melt when they see an animal crying. Animal lovers on the other hand do the best they can to console them. Though according to scientists, animals do not shed tears when they cry and when they do, there may be something physically wrong with them. Some people agree to this, and some disagree.

Sarah Sleime, a volunteer for the Greater Charlotte SPCA, came across a sight that almost broke her heart. A pit bull was crying.

Sleime was vising a shelter in North Carolina, run by the Charlotte Mecklenburg Animal Care & Control (CMACC), and saw the crying pit bull.

“I was waiting for the shelter workers to health check a couple of the dogs we were considering pulling, and I was walking up and down the kennels, and I just saw this pit bull sitting there, and she was very humanlike — slumped over and very solemn,” Sleime told The Dodo. “So I bent over and started talking to her.”

It was obvious to Sleime that the 7-year-old pit bull had just given birth to a litter of puppies, although they were no longer with her now. When Sleime started speaking to her, the dog’s eyes watered as though she had shed tears.

“It was the craziest phenomenon,” Sleime said.

Although it is not clear why dogs cry differently from people, Sleime could clearly see that the pit bull was very upset. She was recently surrendered at the shelter and is also very obese.

“The shelter workers believe she was confined and used as a breeding machine,” Sleime said. “She’s obviously had many, many litters.”

Unfortunately, the Greater Charlotte SPCA was not able to find families to adopt the bigger dogs due to lack of foster homes, but Sleime decided to do something for the pit bull. She got her phone and took a video of the crying dog. Her name was Cinnamon.

“I posted her video on Facebook, and little did I know, it would be viewed like 700,000 times on the first day,” Sleime said.

Sleime’s inbox started to flood with messages from people around the world who wanted to adopt Cinnamon and help find her babies, but it was Sleime’s friend, Meghan Shelton, who would eventually adopt her.

“I have a special place in my heart for pit bulls,” Shelton told The Dodo. “I think they’re a very misunderstood dog and a misunderstood breed. And when I saw her in that video, literally crying in a cage, I cried. My kids cried. I showed my husband, and he said we could go look at her tomorrow.”

There was a long queue of families wanting to meet and adopt Cinnamon the next morning, but the Shelton family were the first in line. They immediately fell in love with Cinnamon when they finally met her.

“She was super sweet,” Shelton said. “They had brought her into a room to meet with us, and we just let her relax. My kids were on the floor with her, and she sat on their laps and knocked them over with kisses.”

The Shelton family decided that she was the one, so they filled out the paperwork for Cinnamon’s official adoption, whom they renamed Rosie. When it was done, Rosie was spayed, and finally went home to her new forever family the next day.

When she finally arrived at her new home, Rosie met another pit bull — a 3-year-old male named Blu — whom the Sheltons already had. Though at first, they were not certain on how the two would react to each other.

“I had no intention of introducing them for the first couple of days,” Shelton said. “I just wanted her to get used to the home and get used to going for walks outside. So we actually brought her into our bedroom with her crate filled with blankets.”

At first, when she arrived at the Shelton home, she was whining at the bedroom door.

“I realized that our male dog was on the other side of the door, and he was doing the same thing,” Shelton said. “So I had the kids put her on a leash, and I got Blu on a leash and we just had them walk outside and meet. It was interesting because you never know how it’s going to go, but they just kind of sat next to each other with tails wagging.”

According to Shelton, Rosie and Blu act like they’ve known each other for years. “I’m working at my desk right now and she’s asleep at my feet, and Blu is on his spot right on the other side of my desk,” she said.

Rosie’s personality is also slowly emerging. “When she gets excited, she snorts like a pig,” Shelton said. “It’s so cute. My girls walked her to the bus stop this morning, and when new kids came down, she snorted at them until they’d come pet her.”

Rosie has only been with the Shelton family for a couple of days, but they already can’t imagine their lives without her.

“It was love at first sight,” Shelton said. “She just kind of pulled at our heartstrings.”

“I found out that so many people surrendered their pets on Sunday (the day Cinnamon was adopted) in advance of the holiday that CMACC had to euthanize over 30 animals that day,” Sleime said. “Some people surrendered because they were going out of town and didn’t want to pay to board their animals. I’m so glad we got Rosie out in time.”

While Rosie found the perfect family, there are plenty of other shelter animals who need homes — and shelters and rescue groups tend to be overwhelmed with animals. You can search for adoptable dogs and cats on the CMACC website, as well as with the Greater Charlotte SPCA. #AdoptNotShop