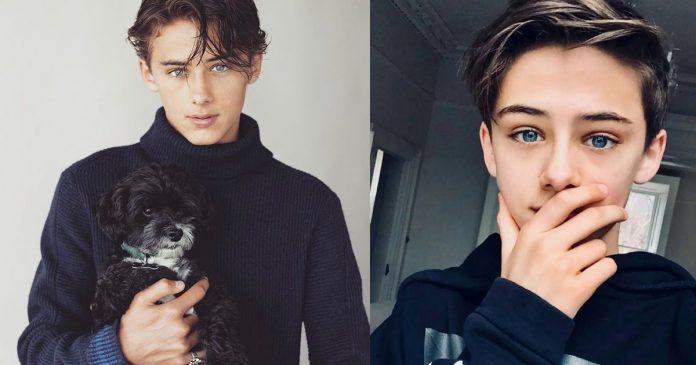 For each family, there is always a child who the parents say is either handsome or beautiful. To everyone’s eyes, all kids have their own extraordinary appeal. Though to some people, a kid’s character or how they were raised is the most important. Usually, a certain person, may it be a grown-up or otherwise, is given the title “most handsome” or “most beautiful” due to their unique and incredibly fine physical looks.

Meet William Franklyn-Miller (Will). He is born in Devon, United Kingdom on the 25th of March, 2004 and lived for the last 5 years in Melbourne, Australia. From 2018 he has been based in Dublin, Ireland. Will is an actor, model and social influencer. At some point in his life, a well-known Japanese blogger saw his photos on the web and posted them on her Twitter page. The photos garnered many retweets and they have gone viral, until so many individuals requested for his Instagram page.

When William checked his Instagram page one day, he was surprised to see that he has gained so many followers. He could not understand where his followers have known of him and where they originated from. William’s mom, Shannon Franklyn-Miller, felt that his account must have been hacked and his family believed that he has been followed by phony accounts. Though after some time, he understood that all of them were his followers from Japan and China, and his fans have explained that he has become very well-known in these countries. They have named him “the most attractive kid on the planet”. Will was overwhelmed by such fame since it has complimented him much more than anticipated, and it has become of great use in his acting profile.

Gradually, Will turned into a web sensation and in 2016 has appeared in a short film entitled, A Fish Out of Water, and followed by an appearance in one episode of Jack Irish as a young Jack, a character played by Guy Pierce when he was older. Additionally, he also modeled for Harrod’s Christmas window and appeared in a music video entitled, “Take Me Over” by Peking Duk.

At that point, Will has risen to fame and his network of fans has expanded. Different Asian shows invited him for a visit, he has been doing various Skype interviews, and numerous popular news outlets took some moments to do some live interviews with him. Will’s network of fans has established fan clubs and talked about his most recent acting endeavors, and made requests for him to visit their cities or countries.

Will does not only concentrate on acting and modeling. He is also a student who is currently taking examinations in school. During his free time, he tries out for many film jobs. In 2017, Will has landed a role in the highly-acclaimed TV series, Arrow, where he portrayed a young Joseph Wilson in two episodes. Then he moved on to another TV series entitled, Neighbours, appearing in one episode.

In 2018, one of his ongoing acting jobs was the short film, “The Resurgence”. The following year, he landed in shows such as Spring Breakaway, Chicken Girls, and Intern-in-Chief. He then moved on to another TV series entitled, Il Medici, landing the role of Giovanni de’ Medici. In 2020, his latest film was “Four Kids and It”, a movie directed by Andy De Emmony, and he played the role of Carl.

Will has done many modeling stints for LA Petite Magazine, L’Official Russia, Italian Vogue and Vogue Russia, and Hooligans Magazine. In 2017, He was invited by Halcyon Kids to be one of the models to do a photoshoot with them. He then has appeared in Bambini, Jr Model, Papillon, and most recently, Visual Tales Magazines. Will has worked for various modeling agencies and he is exclusively represented by Bernard Kira (BMK-ENT, US), Saskia Mulder (The Artists Partnership, London) and Charmaine Gilchrist (Gilchrist Management, Aus) for his films, and Megan Klein, New York Model Management for his modeling stints.

Some facts about William Franklyn-Miller that only a few people knew:

William Franklyn-Miller has pages on various social media platforms. He regularly posts updates for his fans on Instagram, as well as posting new videos on his YouTube channel. You will notice on his social media accounts that there are tons of facts that he reveals about his life and some of his interests. Here are some of them:

Will may want to try skydiving sometime. Truth is, he is scared of heights and does not have the guts to jump out of a plane and finds it completely insane.

William was completely star-struck when he met Jack Black in one of Hawaiian Apple stores. If his memory served him right, his “idol” was a magnificent person when he became more acquainted with him.

If he were given the chance to do what he always desired in life, William says that he acknowledges the astounding engineering and innovative advancement. His interest includes seeing advanced structures and vehicles, and he wants to know more about what contraptions would still be around in the near future. He claims that he wants to perceive what the iPhone X3 would resemble soon.

He loves the Star Wars saga! He imagines living in that universe and utilizing a lightsaber to ward off trouble makers. He also adores “Dr. Who” and imagines how wonderful it would be to play a younger version of the “Doctor.”

When Will is not working or doing school work, or mostly just being himself, he says that he is an entertaining, mindful, and persevering person. His 2.1 million followers on Instagram will attest to that statement.

Will has two siblings: a brother and a sister. Their names are Noah and Siena.

William Franklyn-Miller has a fanbase who calls him “the most attractive kid in the world.” If you want to see more of his handsome photographs and know more updates about him, follow his Instagram: william.franklyn.miller. He is on Twitter and Facebook, as well. You may find him under the username: @willfmofficial for Twitter, and William Franklyn-Miller: Fan Club on Facebook.

Finally, you can subscribe to his YouTube channel by searching his complete name, William Franklyn-Miller, where he regularly records videos of web journals for his fans and discusses his latest endeavors.