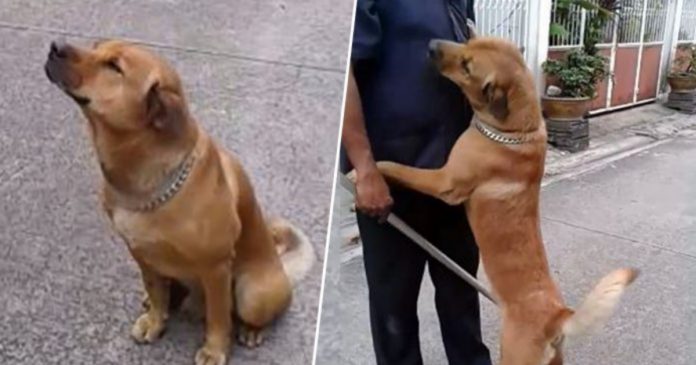 During our childhood days, when we hear our parents summon us to come back home after playing outdoors with our friends, we usually hurry back for fear of being scolded if we arrive late. Being slow is never an excuse when parents call. Apparently, not only humans have such fear of being scolded.

An adult dog in Thailand was faced with an ‘awkward’ situation. A video was shared on a Thai Facebook page showing the reaction of a dog being scolded when it returned home late and walking slow.

His human father was waiting outside the house very early in the morning, holding an iron rod, just like a fierce disciplinarian holding a rattan stick.

Apparently, the dog did not come home during the night and came back the next day. Upon seeing his father calling him, he reduced his walking speed. He started to walk slowly with his head down and feeling guilty.

Initially, the dog sat in a distance still quite far from his owner but eventually approached him hesitantly when his father called to sit in front of him. When he sat a foot away, he was scolded by his father.

Silently, the dog sat with his eyes fixed on his father with fear and regret. He stared at him with an apologetic look.

After listening to his owner, the dog stood up and embraced his father. The owner, in return, knew that the dog felt guilty. He forgave the dog.

Later, the smart dog was seen holding the steel rod with its mouth but dropped it on the street.

You may watch the full video here:

The story brings back childhood memories of being scolded, doesn’t it?

Mother dog and puppy in a heartfelt reunion after puppy recovered...