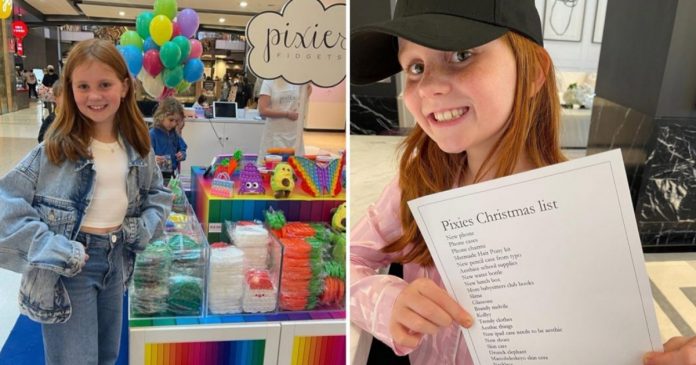 A 10-year-old entrepreneur could retire when she reaches 15 years of age. When most children her age still play with all sorts of toys and girls buy and exchange bonnets with their friends, this young businesswoman from Australia has been busy with her business selling hair accessories and fidget toys.

Pixie Curtis could earn millions and retire at an early age, even before she graduates from high school. Thanks to the success of her toy and hair accessories business which has been booming since the first month it started with her mom in Sydney, Australia, Stellar Magazine reported.

“You won’t need to worry; you can retire at 15 the way you’re going,” PR whiz Roxy Jacenko told her daughter in a joint interview, The Sun reported.

In 2011, Pixie’s Bows was launched by the mother-daughter duo, and in May of the same year, it was followed by Pixie’s Fidgets. The two business ventures are estimated to earn $21 million in 10 years, the outlet said.

Pixie’s mother Roxy Jacenko claimed that the “most rewarding” experience she has encountered was watching her daughter succeed due to her determination and good judgment in managing her business.

“What is the most exciting thing for me is the entrepreneurial spirit that she has at such a young age,” she said.

“I never had it, although it was drummed into me that I had to succeed. When I was 14, I got a job at McDonald’s because that’s what you did back in my day,” Roxy said.

Pixie said that she has a lot of plans to use some of her earnings. One was to treat her mom to a shopping spree, and another was to bring her on a luxury vacation for the holidays.

“Today, my friend told me his family is going to Paris for Christmas, and I think that’s just wonderful, so I told Mom I think we should go to my favorite place, which is Fiji.”

11-year-old Son of Public Figure, Nurul Aini, Shared His Allowance with a Classmate Who Could Not Afford to Buy Food at School

5,000 migrant workers were celebrated and thanked with clothes, haircuts and...