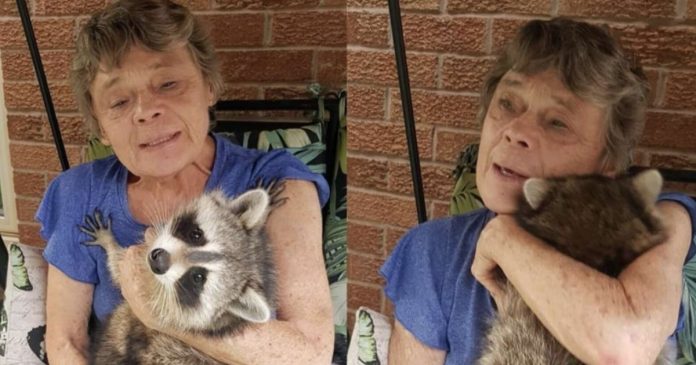 Believe it or not, when an animal has been rescued, they, too, are grateful for the gestures. They may not be able to speak our language, but their token of appreciation is manifested differently. We, in return, can feel these, too.

When a woman named Nikki Robinson found a baby raccoon, the animal was helpless by the side of the road. She then took the raccoon to a wildlife rescue center though by that time, the center was full and there was no place for this raccoon cub.

One of the staff members then advised Nikki to bring the raccoon to a veterinarian to perform euthanasia and this greatly saddened Nikki.

Nicki then decided to take the little raccoon home to be taken care of and gave the name “Little Hands” to the raccoon.

Since Nikki goes to work daily, she leaves the raccoon in the care of her mother, Linda. Her mother at first refused but eventually began to like the little raccoon because of its cuteness and eventually grew fond of him.

Linda even treated Little Hands well, cared for, and loved her as she cared for her own child.

The moon has changed phases, and the raccoon is already beginning to mature. It was time for him to be self-sufficient and return to the wild, his original habitat. Still, something very touching happened when Little Hands returned to visit Nikki and Linda every day for three years.

Since then, he has often visited, accompanied Linda in a hammock in the backyard, eaten snacks together, and gone back to the woods. Nikki also told that after the incident, her mother had raised many homeless raccoon cubs.