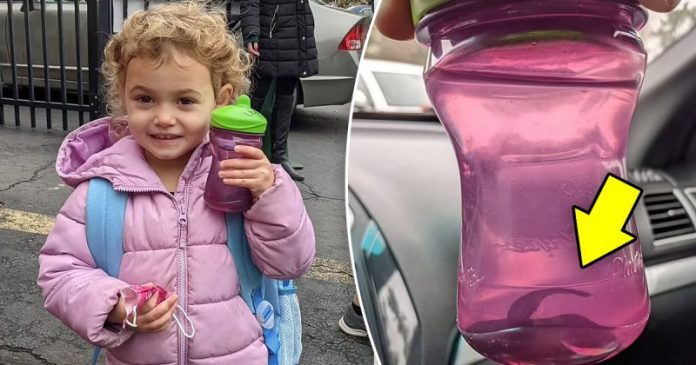 A mother of two, Lauren Scanlan, who lives in Pennsylvania, USA, was surprised when her daughter’s preschool gave her a call, saying that her child ‘sneaked’ her favorite pet into the classroom. The mother was just as stunned as the teacher when she learned of this.

Three-year-old Peyton is very fond of her pet fish, Mermaid. Recently, she brought her pet to school using a sippy cup. However, their shock intensified when they learned that Peyton accidentally drank from the sippy cup forgetting that the fish was still inside.

Lauren immediately texted her recently-married cousin, Connor Hughes, about Peyton’s secret activity. Hughes resorted to his Twitter page and posted screenshots of the hilarious text messages, together with photos of Peyton carrying the sippy cup with the fish inside. The post immediately went viral.

Early that morning, Lauren noticed Peyton feeding the fish. She ran upstairs to get the child’s school clothes, and upon returning, Peyton said to Lauren, “Don’t come over here.” When she asked why, the child just insisted on her not to come closer.

Lauren immediately became suspicious. When she noticed that there was fish food on the ground, she assumed that it was the reason why the child did not want her to come near the mess.

“I told her it’s OK, that I would clean up, and then I didn’t think anything of it,” she explained. “Peyton put her water in her backpack, and we went to school.”

Additionally, Peyton did not forget to put fish food inside the sippy cup for her pet fish, Mermaid.

When Lauren picked up Peyton from school that day, she did not have the heart to scold the child. Instead, she had a heartfelt conversation with Peyton. Lauren asked why she brought Mermaid to school with her.

“She said, ‘Because I just love Mermaid so much,'” Lauren shared. “She was a very good caregiver, and before she closed the sippy cup lid she did put food in it. So I can’t even be mad at her — she was a good pet owner.”

At the end of their conversation, Lauren taught Peyton about what appropriate things are to be brought to school, and which ones are not. Since the day of the incident, Lauren made sure that all their pets are in their proper homes before Peyton goes off to school.

Lauren’s cousin, Connor, and his wife, Brieanne, have recently married. After this incident, though, they were having second thoughts about having children. “I received this text message from my cousin today,” Connor said, “and I’m not sure we’re ready.”

“We were both crying from laughter,” Connor told TODAY Parents after sending the screenshots to his wife. “I don’t know if it’s cured the baby fever, but we both realize there’s some preparing we must do. I, too, have a fish tank. You best believe the glass top is getting sealed shut the moment we’re expecting.”

If this made you smile, share the article on Facebook for your friends and family to read.