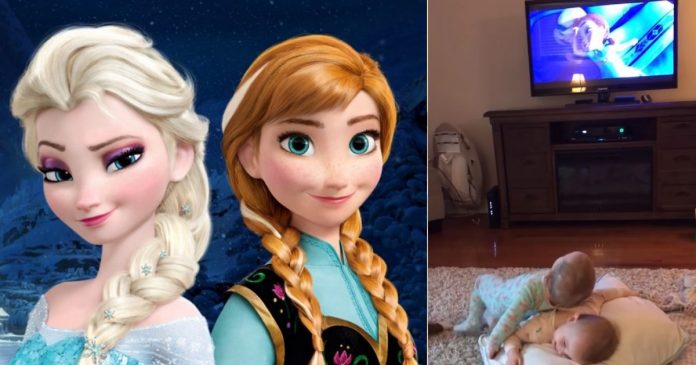 After the Disney cartoon “Frozen” was released in 2013, it immediately set off a trend around the world, with people singing its catchy theme song, and the sequel “Frozen 2” also received an eye-catching box office hit of 1.45 billion. A mother from the United States, Collen Jordan, recently showed Frozen to her twin daughters, Madelyn and Scarlett, but did not expect what she has witnessed.

The video was uploaded in 2017. At that time, the super-cute two-year-old twin sisters, because they like watching “Frozen” very much, have watched the same clip countless times; and for them, Frozen is still very much their favorite. As long as they see their favorite clip of Frozen appearing on the screen, their eager eyes stare wildly at the screen.

But after some time, Jordan discovered that her two daughters didn’t really seem to be watching the movie, but performing their favorite scenes of Anna and Elsa!

Although the twins can’t read the subtitles yet, they can perfectly copy the scenes in the movie, which means that they have watched Frozen so many times that they have memorized the actions. 😆

When they saw Elsa and Anna holding hands, they immediately got up, jumping hand-in-hand in front of the TV while their chubby bellies bounced, the scene was really very cute~ (They were so cute the mother wanted to scream.)

The twins even imitated Elsa in the movie when she made a snowball and kept waving their short hands in the air. It was really cute and lovely!

Seeing Elsa and Anna sliding down from the ice, the twins also made the same gesture, sitting directly on the pillows and falling to the side. 😆 I can only say that this imitating skill is really top-notch!

Afterward, Jordan took a video of the twins and uploaded it. It immediately warmed the hearts of netizens, and they left comments and cheered, “Oh my God! How can they be so cute!”, “Oscar owes them two golden globe awards”, “They are natural-born actors~ Hollywood, hurry up and find them.” Also, some netizens said that this is why children should not watch bad scenes from violent movies… Because they may learn to imitate the actions.

Watch the video of the twins acting out their favorite scenes from Frozen:

Madelyn and Scarlett can replicate all the Frozen movie scenes at such a young age. These children’s learning skills are really powerful! Finally, some people would like to say that after watching this video, they suddenly wanted to have twins. 😆