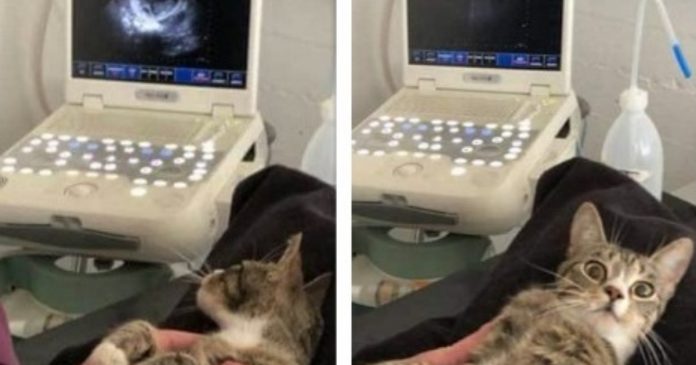 There are many stray animals in Greenland, and the country’s long winter season’s snowstorms and bitter cold can last until spring comes, which means it can be extremely difficult for the stray animals to fend for themselves. For them, finding a safe haven for the rough season is essential. Most of the stray animals hibernate in a place with more tolerable temperatures.

In April 2018, a young tabby cat was wandering the streets of Nuuk, the capital of Greenland, and was brought to an area shelter called Dyrenes Venner (translation: “Protector of Animals in Greenland”) by volunteers.

“Stray and lost cats have a really tough time during the winters up here,” Inunnguaq Christiansen, a board member at Dyrenes Venner, told The Dodo. “With freezing temperatures and frequent storms, they often have to seek shelter in the basements of older buildings.”

Volunteers at the shelter called the cat Ulla, and she immediately felt at home, safe and warm, being friendly and snuggling up with the rescuers. She had no qualms getting along with the other cats, dogs, and guinea pigs in the shelter.

“She’s very lovely and caring,” Christiansen said. “I brought my own dog, Yaris, to the shelter one time and Ulla immediately jumped on the cage.”

Ulla was merely only a year old, but her motherly ways were not unnoticed by the rescuers since she arrived. They were suspicious that she may be hiding a secret since there was something unusual about her.

Weeks have passed and they noticed that Ulla was gaining weight at an alarming rate. She was particularly gaining extra pounds on a certain spot on her body.

“One of the volunteers came with the comment that Ulla was getting pretty big,” Christiansen said. “Upon closer inspection, it was only around the belly area, and her nipples were getting pretty stiff.”

Ulla was taken to the only veterinary facility in Greenland and given an ultrasound.

“We took this cat in a few weeks ago, but only recently noticed the bulge area in her stomach getting bigger and bigger,” the shelter revealed. “Turns out she’s pregnant!”

It was confirmed. The ultrasound screen showed that the young cat was soon going to be a mother!

Ulla’s pregnancy caught everyone at the shelter off guard, and during the ultrasound procedure, Ulla’s reaction was very hilarious – she was shocked. Tone Frank, one of the shelter’s board members, was able to capture Ulla’s wide-eyed expression perfectly.

Frank shared the news and showed the pictures to her fellow board members, and before she knew it, Ulla had gone viral on Reddit.

“The pictures were so funny I decided to post them on /r/aww during my lunch break to see if a couple of people would share my amusement,” Christiansen said. “A few hours later and the post was exploding with 90,000 upvotes and over 900 comments. I spent the entire evening trying to reply to people … We got some really sweet PMs [private messages] from people thanking us for our efforts; it really lifted the mood for the volunteers at the shelter.”

Not only did Ulla’s photos of her reaction to her pregnancy gone viral and brought her internet fame, but she was also finally adopted and found a new home for good.

Netizens are happy for the tabby cat and her new family, but hilarious comments still keep pouring in. One particular comment that caught everyone’s eyes was the one that called Ulla’s impending pregnancy, ‘Immeowculate conception.’

“She’s been living at a foster family since Thursday on a trial period, and they really want to keep her and all of her kittens,” Christiansen added. “With any luck, it’s going to work out for them.”

For now, Ulla is spending her time getting to know her new cat sibling, Sofus, and preparing for the arrival of her kittens.

“They’re doing quite well, and the family has patience and understanding that Ulla needs a little extra space right now,” Dyrenes Venner wrote on Facebook.

A board member of the shelter revealed to TODAY that Ulla is expecting four or five kittens. They will be a wonderful addition to Ulla and her new family, and they are prepared to give them a great start to life. Ulla will be giving birth in the comfort of her new home, instead of the crowded and noisy shelter.

You’ll be a great mother to your kittens, Ulla, and congrats on your new family.