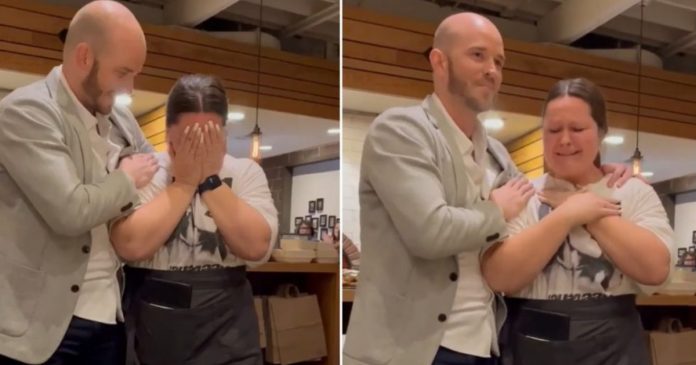 It would have been the most wonderful day for a waitress in Arkansas when she received a $4,400 tip from the good samaritans of the ‘$100 Dinner Club’. Ryan Brandt, the waitress who received the large tip had plans to use the money to pay off student loans when the restaurant manager implied that she could only receive 20% of the tip and the others would be split among all the other employees. However, Brandt was fired for violating the restaurant’s tip policy and was forced to surrender most of the money.

A local real estate company owner named Grant Wise organized a dine-in get-together at the Oven and Tap in Bentonville, Arkansas, for the members of the ‘$100 Dinner Club’ earlier this month. Each member will be contributing a $100 tip.

Before the day of the incident, Wise has called the restaurant to confirm that the serving staff does not share tips. When he presented a check for $4,400 to waitress Ryan Brandt, and to split the cost between her and another server who waited at their table, Brandt was overjoyed, and in tears, Wise informed KNWA.

Upon discovering that Brandt was given such a large sum of tips, the restaurant managers told her that she would have to split some of the money with the other employees of the restaurant. In the three-and-a-half years that she has worked in the establishment, this was a request that was never done before.

“I was told that I was going to be giving my cash over to my shift manager, and I would be taking home 20%,” Brandt told FOX 59, noting that she had never been asked to split her tip before in the three and a half years she worked there.

A Spanish student at the University of Arkansas, Brandt, who is in her early 30’s, was supposed to use the money to pay off her student loans when she was left devastated to hand over the large amount to her superiors.

After a few days, Brandt was fired from her job at the restaurant for ‘violating’ its rules by telling Wise about the restaurant’s policy on receiving tips.

During the COVID-19 pandemic and the worldwide lockdown, Wise noticed that many restaurant servers are struggling and were deeply affected by COVID-related situations. Hence, he came up with the idea of the ‘$100 Dinner Club’. At the time that he hosted a real estate conference in Arkansas, he organized the event to be held at the Oven and Tap Restaurant, his and his wife’s favorite dine-in place.

After confirming from the staff at the restaurant that they did not have any policy on sharing tips, Wise and his wife went on with their plan.

“We knew servers were hit hard through COVID, and it was something that a friend had come up with to help give back,” he told 5 News, noting that he chose the Oven and Tap because it was one of his and his wife’s favorite restaurants.

“I’m so sorry to interrupt everyone’s dinner, this will only take 60 seconds,” Wise begins in the video. “We have a table full of absolutely amazing people from all over the country who have traveled here, and tonight we’re hosting a $100 Dinner Club,” he says, as he wraps his arm around Brandt, and points to some people behind the video.

“Everyone at this table has contributed or tipped $100 for you and for the other waitress who unfortunately had to go home because she’s not feeling well. And then we put it out to our social media channels, and then we had a bit more money sent in, so we are tipping a total of $4,400 for you to split with the other girl who took care of us.”

The heartwarming moment that was posted to Instagram on December 10.

The touching moment soon became devastation when Wise found out that the restaurant managers forced Brandt to split her tip among all the other employees, and was fired soon after. He left text messages to the restaurant owner but was unable to speak with her.

Upon returning to Oven and Tap restaurant to get his money back and personally hand it over to Brandt, that was when he discovered she was fired. He resorted to his social media about the incident on December 7.

“I’m so saddened to hear that the girl we tipped the other night at our $100 Dinner Club has been fired from her job,” he wrote on Facebook. “I don’t fully understand why this would happen to what seems like such a sweet and kind-hearted woman. Nonetheless, I’m committed to showing her that there are great people in the world that will do good when they can.”

He posted another video carrying the same message on YouTube, where he announced that he would be opening a GoFundMe page for the waitress.

“I hope that we can help this girl stay on top, and not let something like this get her down,” he said, “I don’t fully understand it … but I want to do as much as we can to help.”

In their defense, Oven and Tap officials said to FOX 59: “After dining, this large group of guests requested that their gratuity be given to two particular servers. We fully honored their request. Out of respect for our highly valued team members, we do not discuss the details surrounding the termination of an employee.”

“My only goal is to help her get through this experience with the least amount of stress and anxiety possible and onto whatever her next opportunity may be,” Wise said on the GoFundMe page.

Recently, Wise posted an update on his social media pages saying Brandt was offered a new job at another restaurant and began working on December 8.

Finally, Grant Wise shut down the GoFundMe page, after it reached $8,700.

A happy ending for the prosperous holidays. Share this heartwarming and inspiring story with your friends and family on your social media.

11-year-old Son of Public Figure, Nurul Aini, Shared His Allowance with a Classmate Who Could Not Afford to Buy Food at School