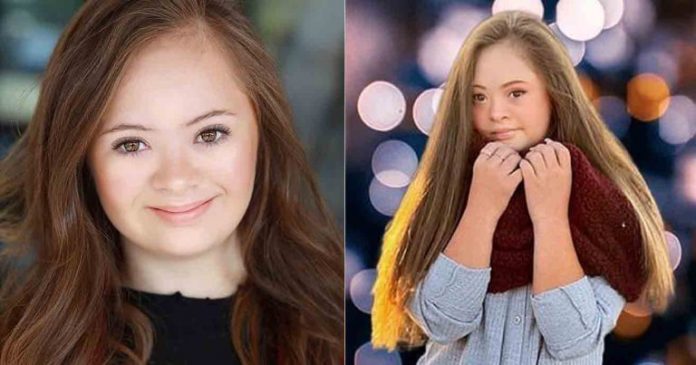 15 years ago, a baby born with Down Syndrome was suggested to be up for adoption by her pediatrician, but her mother refused. Now, she is a very successful leading model who beats all odds when her mother made the right decision to raise her.

Renee Garcia of Colorado Springs, Colorado, was in pure happiness when her daughter, Kennedy, 15, was born.

Upon seeing that she was born with Down Syndrome, her doctors suggested she be up for adoption since she may be spending most of her life depending on her mother and not be able to grow up maturely. Renee refused, proving them all wrong by keeping her and raising her, helping Kennedy build a successful future.

Renee succeeded. 15 years later, Kennedy grew up with a successful career as a leading model and managed to have a boyfriend. A stunning model at an early age, she has worked for Justice Clothing, American Girl, and Disney.

Renee was devastated upon hearing from the doctors their suggestion on putting her baby up for adoption right after she has given birth. Fortunately, a fellow mother who also had a daughter with the same condition as Kennedy, claimed that her daughter can still have a bright and promising future.

Kennedy has undergone a dangerous spine surgery which turned out to be successful. Soon after, she developed a passion for singing and modeling. She has signed contracts for agencies such as KMR Diversity and Dream Talent Management which honed her talents and helped her get into auditions in Hollywood and New York City.

Over time, she has performed on stage and appeared in TV shows such as This is Us and 9-1-1.

Kennedy also started dating 19-year-old Matthew, who also has the same condition as Kennedy. A good conversation has caught his eye and won him over.

“He just came over, handed Kennedy his cell phone, and said, ‘I think my phone is broken because your number is missing,'” Renee said of Matthew.

“I felt devastated when the pediatrician told me I needed to put her in an institution. It’s shocking how misinformed they all are, and that was only 15 years ago. I feel there is progress. Kennedy was quite welcome wherever we went.” Renee said, proudly telling The Mighty about her daughter’s life story.

If this story touched your heart, share it to friends and family, and on your social media.