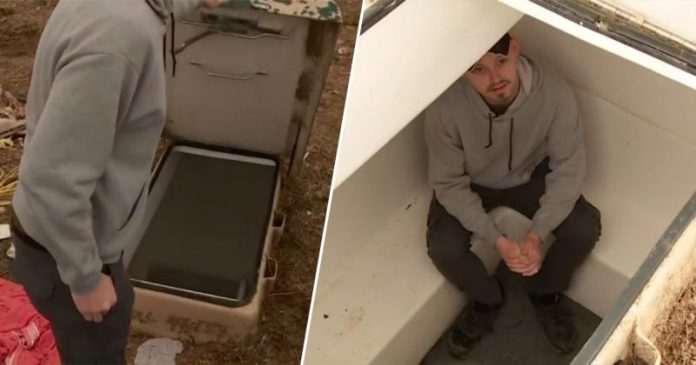 A family in Bremen, Kentucky was overjoyed that they have invested in setting up an underground storm and tornado shelter more than a decade ago. They were convinced that it was well worth it when a tornado hit the city and the family was able to finally use the shelter that saved their lives, although it has not been used once in over 10 years.

December 11 was the day when the strongest tornado hit Kentucky, and its cities were left in devastation. The tornado which hit Bremen’s neighboring city, Mayfield, the worst, destroyed everything in its path, leaving everything in ruins.

Jordan Evans and his son, Gage, were out of town when the strong tornado hit Bremen, Western Kentucky. The aftermath left his hometown looking like a warzone.

His family’s residence did not have any indoor basement or underground shelter, though outside next to their home was an installed tornado shelter 10 feet deep and 12 feet wide, and was set up more than a decade ago.

Gage’s stepfather, Justin Pointer, led all 8 members of the family and their 2 dogs in the house to the small shelter. Though the space was cramped and uncomfortable, they managed to stay inside until the tornado subsided.

“It started rocking the door so hard and hard, that we had to hold it back,” Justin recalled when the natural calamity struck.

In the end, all of them managed to get out alive. Luckily, the small space has saved their lives during the tornado’s wrath that destroyed most of the houses in the vicinity.

Justin’s father built the underground shelter more than 10 years ago. The family has forgotten how much it cost to set up the shelter, but they are more than grateful that it was installed and all members are now safe.

Although the shelter was never used until the natural calamity struck, it has saved lives when the family finally use it.

“Dad said he would pay a hundred times over for her now,” Justin said.

88 lives were lost in Bremen and Mayfield combined, and Mayfield was the worst affected. The city now is in ruins, people have evacuated, and now resembles a battlefield memorial. Some places are now looking like ghost towns.

“Our infrastructure is badly damaged. We have no running water. Our water tower is gone. Our wastewater management is gone, and there is no natural gas in the city. So we have nothing to rely on here. It’s just for survival at this point for us,” said Mayfield Mayor, Kathy Stewart O’Nan.

The cities that the tornado demolished may take weeks, months, or even years to rebuild, and everyone believes Kentucky’s ruined cities will rise again. Locals of the state will persevere to build the communities back, and they will.