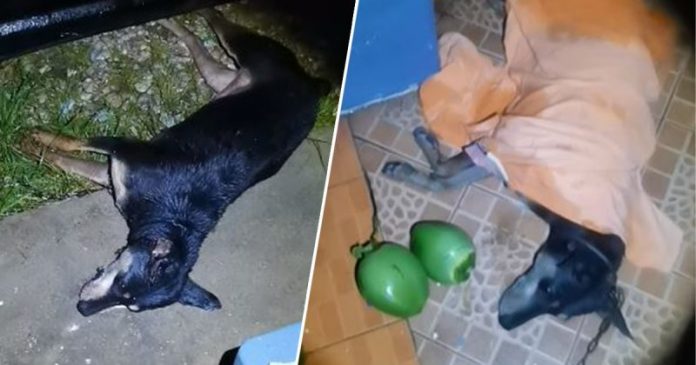 For so many years, cruelty to animals still has not been eradicated. Although there are millions of animal lovers in the whole world, there are still individuals who are otherwise trying to eliminate animals that seem useless to them.

However, stray animals roaming our streets continue to be targeted for elimination and at times captured and sold for their meat. No matter how most organizations fight for stray animals to be saved, animal cruelty seems to be the fate of these innocent stray creatures.

Recently, a stray black dog was poisoned, although it was unknown who poisoned him or how he ingested it. Just the thought of seeing an innocent dog dealing with such pain is intolerable.

According to a Facebook user, Apih McQuinn, the dog that appeared to be poisoned arrived in his home at around 3:30 AM.

“Even though he is a dog, he is still a creature created by Allah. He is not my dog, and I don’t know who did this to him. It looks like he escaped.” Apih McQuinn said. “There is a possibility that he was poisoned, so I tried my best even though I am not a veterinarian.”

The unknown dog seem to have been asking him for help when he saw him inside the house.

Apih admitted that he was scared of dogs, but felt sorry for this one since he was feeling cold and there was foam coming out from his mouth. He assumed that inhumane individuals in the area may have done this to the dog.

Immediately, Apih covered the dog with a warm blanket and gave some coconut water, although he was unsure of what to do to rid the dog’s body of the poison.

As of this writing, it is still unknown what has become of the dog’s fate. Netizens thanked Apih and wrote comments of appreciation for what he has done to help the stray dog, even when it appeared in his home very early in the morning.

You may view the videos on Apih McQuinn’s Facebook page: (Click on the link below the photo)

Thank you, Apih, for your help and concern for the stray dog who needed it. May you be showered with more Blessings.

Groomers give neglected dog a makeover—after shaving off 35lb of fur,...