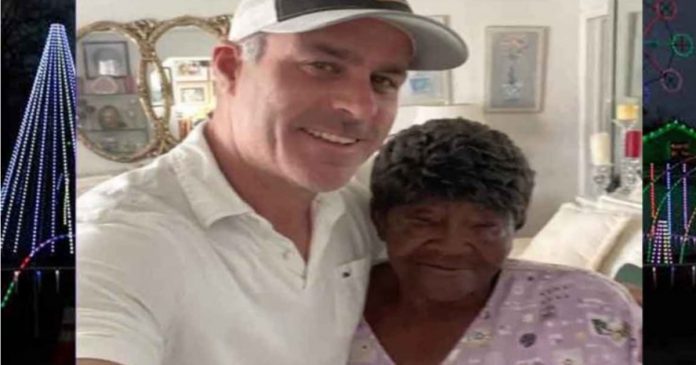 20 years ago, Gladys Hankerson from Delray, Florida, was trying to contact her sister who lives in Maryland. Instead of dialing the state’s area code of 410, she hit 401, which linked her call to a man named Mike Moffitt in Rhode Island.

Gladys told Mike that she was trying to call her sister in Maryland.

“At first, as she said, ‘Oh, sorry!’ and she was really a Southerner, very friendly, polite, very sweet, she was like, ‘I’m sorry, son!’ and then she hung up very quickly,” Mike said.

Over the next few weeks, she called again, hoping that this time she had dialed the right number to her sister.

“Finally, I said, ‘Wait, wait, wait, before you go, who are you, where are you from, what are you trying to do?’ And we started talking,” Mike said.

Gladys met Mike during a difficult time in her life. At the time they met, she was divorced and lost her son. Mike always lifted her spirits when they chatted.

The two kept in touch over the years through phone calls, mostly chatting about their children. Mike discovered that Gladys has 10 children, and she learned that he had 3.

“She had her son call at one time to let me know that somebody close to her passed away. He was like, ‘My mom just wanted me to call and let you know,'” Mike said. “All of a sudden our friendship became not like a superficial check-in call… I understood what it meant to her.”

A day before Thanksgiving in 2021, when Mike was on his way to Florida together with his wife and kids, Gladys and Mike finally met.

“Oh, it was such a great day, that was the happiest Thanksgiving there was, that made my day,” Gladys said. “I wish more people could be like that, you know? That would be so nice, the world would be better too, people would be better.”

On Thanksgiving Day in 2021, Mike shared a photo of Gladys and himself on his Facebook page, which was shared more than 2,000 times. The post read, “There are incredible people in this world that are a wrong number phone call away…”

Mike and Gladys are two lucky people who found friendship with each other. Some people say that they believe in “soulmates”, but… we may be just lucky to find good friends. There is always someone out there who listens. C’est la vie!

A Woman from England was Told by Her Doctors that She Can Never Conceive; Now, She Has Three Babies in 1 Year