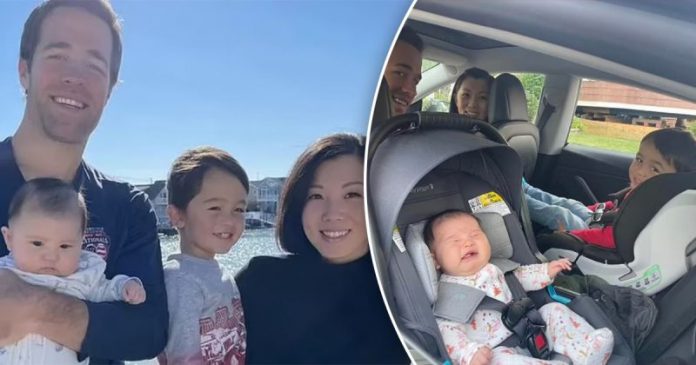 The car was on autopilot when she gave birth on the way to the hospital. The couple thanked the manufacturer of Tesla Automobiles for coming up with such a brilliant idea, and the baby’s birth was good news for the high-end car company.

At midnight on September 9, Yiran Sherry began to have contractions, though she assumed it was not the day she was going to give birth.

“I knew that it’s nearly the day of my childbirth, but I didn’t think it’s going to happen anytime soon.”

The couple met at Rainbow Bridge International School in Shanghai, where they both work as teachers. At present, they have a 3-year-old son named Rafa and are ready to welcome a baby into the family.

Yiran and Keating were preparing Rafa for pre-school that morning when the incident took place. On the way to school, Yiran felt her water break while they were stuck in traffic.

They knew that they were not going to make it on time to the hospital due to the traffic congestion. Keating set the navigation system to their destination, a hospital 20 minutes away in the western suburb of Paoli, and placed the vehicle on autopilot.

Keating left hand was still on the steering wheel while he attended to his wife with his right hand.

“She was squeezing my hand to the point where I thought she was going to shatter it,” Keating Sherry told the Inquirer. “I was saying ‘Yiran, OK, focus on your breathing.’ That was advice to myself, as well. My adrenaline was pumping.”

Due to the traffic that was barely moving, the short trip to the hospital took longer than usual and Yiran constantly checked on the GPS to see how much further was their destination. Though she already knew that the baby was coming very soon.

Fortunately, when they arrived, a pediatrician was standing outside the hospital who prompted the nurses to attend to the couple’s vehicle. A nurse cut the baby’s umbilical cord.

“She’s healthy, congratulations,” The pediatrician said. The news made the couple feel relieved and happy that everyone was safe.

“Two months ago, we welcomed our beautiful baby girl, Maeve Lily Sherry, into this world🥰! She couldn’t wait to arrive… born in the front seat of our 🚗 en route to the hospital! Maeve amazes us each day 😍👶🏻,” she writes.

Maeve was known to be the first ‘Tesla baby’ prompting the couple to attach the name ‘Tess’ to their baby’s name. Eventually, Lily was the name that the couple agreed upon.

The baby’s birth was great news for Tesla, which was plagued with bad publicity for abuse at the workplace and automobile safety concerns.

An Internet Celebrity Slims Down 3 to 4 Kilograms Due to Insufficient Food Reserves When the City of Shanghai Had a Lockdown for 3...