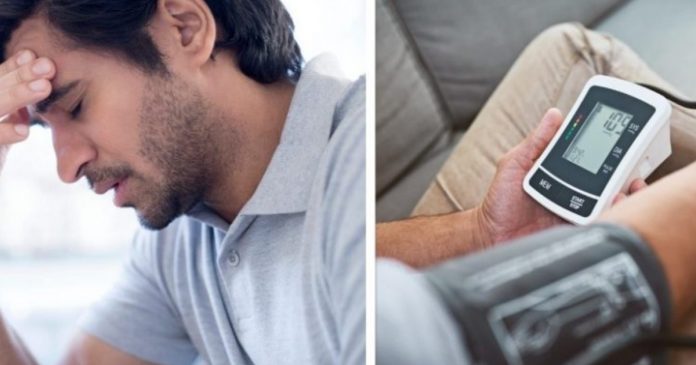 People say that a simple aneurism caused by hypertension is like a thief in the night, they can snatch your life anytime. Hence, they are called the “silent killer.” Although high blood pressure often occurs to some people, what they fear is not hypertension itself, but the complications it can cause such as heart disease, kidney disease, encephalopathy (damage or disease that affects the brain), among others.

Midnight, recently, reports came in about an ambulance that sped its way to a hospital emergency room entrance.

A 36-year-old unconscious man was rushed to the hospital and was immediately given a CT scan after his wife has explained the situation before the attack. Test results showed a rupture on the left basal ganglia of his brain. Doctors diagnosed this as Hypertensive Intracerebral Hemorrhage.

With the consent of the patient’s family, he was immediately operated on. 3 hours have passed and the doctors finally came out and gave the sad news. His wife broke down into tears and cried out, “I have advised him not to stay up late, but he wouldn’t listen!”

It was revealed that the patient was suffering from hypertension for nearly 10 years. According to his grieving wife, he would only take his medications when this hypertension would attack and not take any maintenance medicines when it was normal, which made it difficult to stabilize his blood pressure.

The wife said that her husband had the habit of lying in bed at night and playing virtual games until around 3:00 in the morning. He never listened to his wife’s repeated advice of sleeping early, even when she kept persuading him. One early morning, he got tired of his wife’s ranting that he started quarreling with her. After some time, he suddenly fainted. Although he was brought to the hospital in time, hypertension that kicked in did not save his life.

Doctor’s advice: People with a history of high blood pressure should avoid lack of sleeping hours, they should sleep early at night. The main cause of cerebral hemorrhage in men is the sudden change in their mood. People with a history of hypertension should have maintenance medicines because their blood pressure is not always the same. It is slightly higher than normal during the day and is slightly lower at night.

“Blood pressure is one of the best predictors of cardiovascular health,” said lead study author Caroline Doyle, a graduate student in the University of Arizona, Department of Psychology. “There is a lot of literature out there that shows sleep has some kind of impact on mortality and on cardiovascular disease, which is the No. 1 killer of people in the country. We wanted to see if we could try to get a piece of that story – how sleep might be impacting disease through blood pressure.”

Staying up late for a long period causes Myocardial Ischemia, which is when plaques build up in the coronary artery and block the blood flow to the heart muscle partially or completely. When the plaques explode, these will cause a heart attack. This may also affect the blood supply to the brain, prompting Arteriosclerosis.

According to John Ruiz, University of Arizona Associate Professor of Psychology, it is not the amount of time you stay in bed that matters, but how much good-quality of sleep you are getting.

“Keep the phone in a different room,” he suggested. “If your bedroom window faces the east, pull the shades. For anything that’s going to cause you to waken, think ahead about what you can do to mitigate those effects.”

1. Take Selenium as a supplement

• This is an important factor in oxidation for vascular damage.
• When organic matters decay in the human body, this may have a strong destructive effect on blood vessels.
• When they are damaged, cholesterol deposit is easier and faster.
• Take “Antioxidants” – a substance that prevents the oxidation process in the body.
• Drink lots of liquids that are rich in antioxidants: Green tea, Red tea, Dendrobium, Yuanfuju, among others. Drinking these antioxidants frequently can reduce blood lipids and soften blood vessels.
• Among these, Yuanfuju is the best antioxidant. Not only is it rich in Selenium, but also contains nutrients such as Triterpenoids and Phytosterols. It can help lower cholesterol deposited in the bloodstream, help prevent atherosclerosis, and maintain blood vessel elasticity.

It is a fact that blood pressure drops during the summer. Patients with hypertension should adjust the dosage of their medicines accordingly as per the advice of their doctors. Some patients, though, do not follow these instructions, hence, their blood pressure rises again. Once they try to get back into the routine, the pills no longer work. This is called “retaliation rebound” of blood pressure. It is best not to stop drinking your meds to avoid an increase in blood pressure.

Here are the 3 conditions to site before adjusting your dosages of hypertensive medicines:

During summer, observe these three signs. Adjust the medicine dosage as prescribed by your doctor.

The daily proper water consumption is 2500ml. Depending on the amount of daily food intake, each person needs to replenish about 1200ml. per day. Drinking 200ml. of warm water in the morning, and another 200ml. of warm water before going to bed at night is a good supplement for metabolism.

The three pointers above can effectively prevent cerebral hemorrhage when followed accordingly. People who suffer from hypertension whose moods spike up will have a blood pressure of about 30 mmHg., increasing the possibility of a brain hemorrhage.

Helpful tip: Relax and take deep breaths. Try to develop a hobby or two, and most especially, try to do 3 things daily that will make you happy and enjoy life. Help yourself stabilize your moods. Most importantly, sleep early and have enough rest.

“This study stands on the shoulders of a broad literature looking at sleep and cardiovascular health,” Caroline Doyle said. “This is one more study that shows something is going on with sleep and our heart health. Sleep is important, so whatever you can do to improve your sleep, it’s worth prioritizing.”

Share this article with your friends and family, or share it on your social media, to raise awareness against hypertension and cerebral hemorrhage.

Researchers have proven that squatting is far better than sitting for...