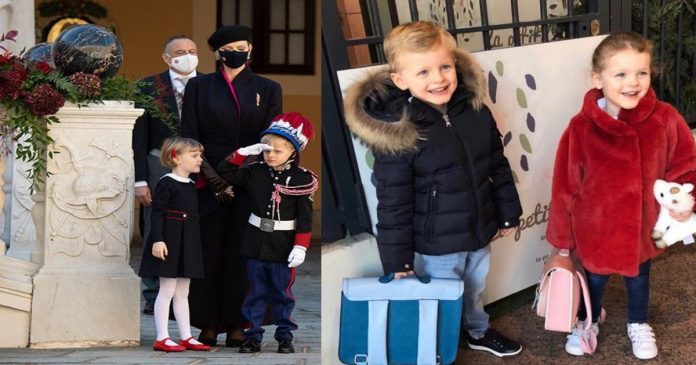 They will turn 7 this year and have been named the most lovable twins in the royal family. As young as they are, they have countless fans, and their blooming good looks stand out from the other members of the British royal family members!

The twins, Princess Gabriella and Prince Jacques of the royal family of Monaco are the children of Prince Albert II and Princess Charlene. They were born on December 10, 2014, and they inherited the charms of both their parents. Blonde hair, blue eyes, and a naturally fair complexion bring out their natural beauty. They are the focus of everyone around them, and they are highly popular wherever they go.

Prince Jacques is the heir to the throne, although he was born two minutes younger than his sister, due to the laws of succession of Monaco, which favor the males.

Since they were younger, the twins have been inseparable, and they have often been photographed engaged in a warm hug.

Prince Albert II and Princess Charlene met during a swimming competition, with Prince Albert 20 years her senior. He is turning 63 this year. Charlene, a commoner born in an ordinary family, was a competitive swimmer. She was called “The Mermaid Princess” with a model figure. The two were married in 2011, and the ceremony was named the “Wedding of the Century.”

The twins have already started attending classes in school. During the first day, Princess Charlene shared a photo of the twins on Instagram while they were going to school, holding hands, and staying together wherever they go. According to Prince Albert II, Princess Gabriella and Prince Jacques are very interested in “geography and science.”

At a very young age, the royal twins are inquisitive about everything they are interested to learn about, and the public is eager to learn more about these adorable royal twins until they grow up.

↓↓Here are some photos of the children and their lovable moments with each other. Enjoy!↓↓

Heartbroken elderly man gets stood up alone in the cinemas raises...