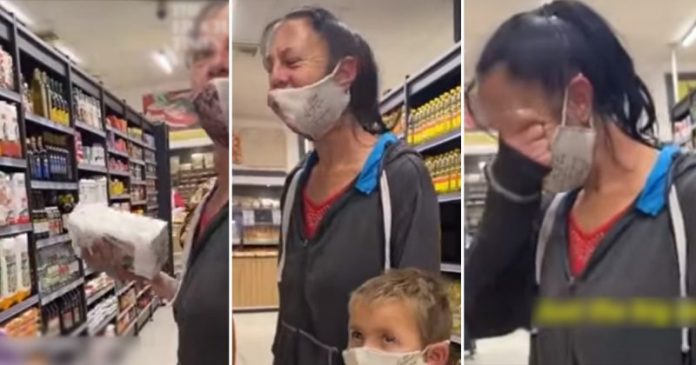 During this ongoing pandemic, many people’s lives have been affected and been living in hardship. Some people who were hit hard and can no longer afford to buy their usual food consumption endure hunger.

In a grocery store, a man spotted a mother with her two children buying the smallest MaizeMeal corn flour. He started having a conversation with her and told her daughter to grab a trolley for their groceries. He surprised the mother by telling her that he will pay for her grocery items.

For some people, a little help through contribution can bring happiness to the receiver. The man noticed that the mother did not bring a trolley with her since she could only afford to buy the smallest packet of MaizeMeal corn flour.

“Why did you just take the small one? Why didn’t you bring a trolley?” asked the man.

“Because I just want to buy this one, there’s no need for a trolley,” the mother replied.

The man felt that this family could not afford to buy so many grocery items, hence he presented that he would pay for them. He insisted even when the mother was hesitant.

“Go get the trolley and fill in the stuff you want today, I pay.” He said to the mother and told the daughter to get a grocery cart.

The mother looked at him in disbelief, thinking about how there can be unusual situations just like this that an individual would present themselves to pay for a stranger’s basic needs.

Introductions have been made between them.

“Leti. And what is your name?” Leti asked in return.

“I’m Kevin, and I’m serious. Just fill-up the trolley, and I pay for it all,” Kevin said.

Leti could not believe her luck that day, and she wiped her tears while holding her son’s hand.

After Leti’s daughter arrived with the grocery cart, Kevin placed a 10-kilogram pack of MaizeMeal cornflour in it and asked what they needed to get next.

They headed for the meat section and got some pork. They also got brown sugar and milk. Kevin insisted on getting the bigger sizes for the children’s consumption.

“Get the bigger sizes. The children can’t survive if you take the small one,” said the generous Kevin.

Kevin then handed over some money enough to pay for all of Leti’s groceries and other essential items. Happiness filled Leti’s heart, and kept repeatedly showing her appreciation to Kevin. She said “thank you” many times.

The joy and appreciation from Leti and her children came from the generous contribution made by a certain kind-hearted man they met named Kevin.

There is a different feeling of satisfaction when you help others, may they be family, friends, or even strangers. They are grateful, and deep inside, you feel the happiness they have felt, too.

Alternatively, this is another version of the video from YouTube: