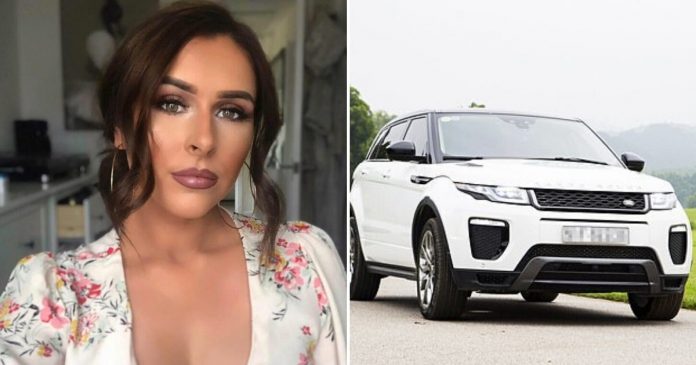 Range Rover, Land Rover, we’ve all made the mistake of mixing up the two, thinking that both 4×4 brands are the same – but they’re not! Let’s take a stroll down memory lane shall we? Land Rover is a brand, while Range Rover is a specific type of Land Rover.

It’s like the difference between thumbs and fingers – All thumbs are fingers, but not all fingers are thumbs.

Now that we’ve gotten that straighten out, this NHS secretary living in Cardiff was made to live with the mistakes her mechanic made once her ‘Rearrange Rover’ came back from the workshop after a horrific accident.

Aimejoo Madge was a victim of an accident when her dream car, a £24,000 (USD32,500) Range Rover Evoque was rear-ended by another vehicle that was a part of a four vehicle crash.

Sending her car to the mechanic, upon receiving her car six weeks later, she did not notice the big blunder her mechanic made while fixing her car.

Having not noticing it in the beginning, it was Aimeejo’s boyfriend Scott, who noticed the mistake.

“Being a Range Rover it was a dream car for us and I have always wanted one. We worked really hard to afford it.”

“When we got it back at first nobody noticed anything was wrong because we were more focused on the damage which was fixed.”

Thinking that it may have been a prank, the mistake was down to the incompetency of people at the First Choice Accident Repair in Cardiff.

“Scoot thoughy, hang on, this doesn’t look right because it says Rover first.“

Anyone knows that the word ‘Range’ should’ve come first, so her boyfriend sent her a photo of the mistake.

“I still didn’t believe him. I was in shock and just laughed at first.”

At this point, she realised that her boyfriend was just messing with her, until she made him send her a video of the mistake.

“I thought it was a prank and thought Scott had done something with the camera so I made him send me a video.”

“They basically put the badge wrong. I must have been the only Rover Range in the world. It was absolutely embarrassing.”

She mentioned to The Sun, that commute to work was humiliating, even if the mistake was just a rearranged Range Rover emblem.

“I still had to drive it to work. It was humiliating because it was so visible.”

“I had a private number plate so the attention would have been drawn to that area.”

“I parked it up against a tree in an effort to hide the blunder.” She also questioned the lack of quality check by First Choice Accident Repair.

On a positive note, the mistake has since been changed by the mechanics a week later. Range Rovers are expensive, so it is only natural that a vehicle owner would feel overwhelmed should something go wrong with it, especially in the case of Aimeejo and Scott, where they are made to save hard for the dream car and was made to live with the blunder for a whole week.